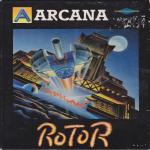 Hands up all those who pine for that all-time-favourite Thrust to play on their Arcs. The wait is over... and it's been well worth it.

Rotor takes all the best bits from Thrust, to make what can only be described as the best yet shoot-'em-up on the Archimedes. The aim is to pilot your 'rotor' around a series of caves and tunnels, collecting enough sun-crystals to escape from an enemy fortress.

The task is not an easy one, especially when you have enemy cannons firing up your after-burner. Just when you think you're stable, a localised gravity field is on hand to stuck you in or throw you against the nearest wall. Flying the rotor is difficult, so a training mode is provided. Provision is made for mouse control although the keyboard feels easier and more responsive.

As well as the sun crystals, there are a number of extras that can be collected to upgrade your ship. When you first start a mission, the rotor is a slow and cumbersome craft. But once you've got all the add-ons, you can go off around the tunnels, blasting everything in sight with little chance of the slightest scrape. The graphics and sound in Rotor are a direct port from the 16-bit version of the game.

But that isn't to say that they're bad, quite the opposite really. The ship has a metallic look and the backdrops are excellently drawn with realistic drips of water.

Sound comes in the form of a realistic collection of arcade-like bangs and crashes. Connecting the Archimedes up to an amplifier gives a real sense of 'being there'.

Arcada should be congratulated on its commitment to the Arc and I look forward to future releases with anticipation.

Can only be described as the best shoot-'em-up yet on the Archimedes.
Logout