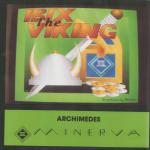 In this, Minerva's eight game release, you play the part of a marauding viking by the name of Ibix. It is your task in life to wander the land, looting, pillaging and generally having a good time.

There are plenty of 'meanies' out to stop you, but a quick flick of the wrist with your dagger should stop all by the meanest in their tracks.

Anyone familiar with Hoverbod (Minerva's second game) will know what to expect - Ibix is remarkably similar to look at and to play.

Graphics are best described as 'cute', with small, detailed sprites making up the majority of the scenery. Sound is up to the usual standard, with various sampled squeaks and grunts, squeaking and grunting at the appropriate moment.

However, the sounds in the production version of the game will be different, forming the basis of a 'spot-the-sound' competition to be launched by Minerva.

As well as the sound effects, there is also a vaguely musical bleeping in the background. It's a shame that Minerva couldn't have dispensed with the sampled effects and instead, had a 'proper' jolly tune to loot and pillage to.

The plug point Ibix has inherited form Hoverbod is the graphics which were also cute 'n colourful. Unfortunately, Ibix has also got the same lousy gameplay.

Sprites tend to flicker and jerk around the screen, and control of Ibix himself is often sluggish and unresponsive. Fortunately, there is a lot more to do, problems to solve, keys to collect and so on, although this hardly compensates.

The only thing that can possibly save Ibix The Viking is the inclusion of a game designer. This is a complex section and allows all sprites to be redesigned as well as changing the behaviour of the meanies for different situations.

Scenery can be designed to any specification including animated pieces such as portculisses or clocks.

You can also add your own sound samples, that can be triggered by some action. Perhaps a 'squishy' sound as you inadvertently step under a falling block...

Ibix The Viking is a bit steep at £20, but Minerva is using the inclusion of the game designer to justify this. The game included with the package is pretty simple though you will get better results if you are willing to persevere.

I would only recommend this to hardened arcade adventurer types or perhaps to Hoverbod fans (if such persons exist).

Gameplay is lousy. Sprites tend to flicker and jerk around the screen, and control of Ibix himself is often sluggish and unresponsive.
Logout