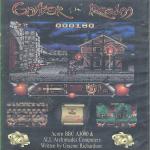 Enter The Realm could be described as the sequel to Nevryon - but instead of aliens it features knights. Written by the same author, Graeme Richardson, you play the noble knight Kharas, whose job is to seek out the great wizard and perform the obligatory quest.

Although the game manual hints differently (there is mention of gallivanting around on horseback), Kharas travels on foot, avoiding obstacles and killing nasties. Armed only with a set of knives and a strong right arm, he must progress through various lands in his search for truth.

At stages along the way buildings can be entered; some contain clues to help you on your way, others house a selection of do-gooders, keen to offer advice. By following their instructions, Kharas can work out what his quest really is and gets down to the important job of monster bashing.

The game takes place on a horizontally scrolling landscape, similar to your average arcade adventure. What makes it stand out are the six levels of parallax, used to excellent effect to give a real sense of depth to the screen.

Parallax scrolling is basically the technique of moving different parts of the background (and foreground) at slower or faster speeds, depending on their depth in the overall scene.

If you imagine looking out of a train window, the hills in the distance seem to move much slower than the trees alongside the train track. This is the effect parallax utilises to give an illusion of depth. The graphics in the actual game are pretty good, if a little uncolourful. However, there is a price to pay for the fast (50 frames per second), multi-layer parallax - mode 9 is used throughout, limiting graphics to sixteen colours maximum at a time. The sound effects are of a high standard and the opening music sets the mood.

Like other adventure games, there is little to hold your attention once completed, but this is likely to take a while. If striding around in a tin can is your idea of fun, Enter The Realm is perfect.

The graphics in the actual game are pretty good, if a little uncolourful. If striding around in a tin can is your idea of fun, Enter The Realm is perfect.
Logout