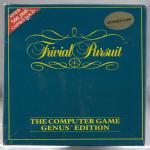 Booting the game from the (Risc OS) desktop gives a simple loading screen, followed by graphical representation of the Trivial Pursuit board. Up to six players can then type in their names and the game begins.

Dice throwing is simulated with an ever-changing die which can be stopped by pressing a mouse button. Possible squares are marked on the board with an X and a number of relevant topics are shown.

On selecting a question topic, the screen changes to the question window. A room appears in which 'TP', the Trivial Pursuit question master lives. He asks you the relevant question in a squeaky voice (it's also printed) and then proceeds to walk up and down until you give an answer.

Questions can be one of three types - textual, graphic or musical. Textual questions are just straightforward written ones. With graphics, a displayed picture forms the basis for a question and for music questions, a tune is played.

Play continues until one player has collected six pieces of pie (or cheese).

As an alternative to the board game, Trivial Pursuit on the Archimedes works relatively well. Some of the questions seemed to repeat themselves after a few games. Also, a number of the questions were aimed specifically at home computer owners.

Apart from that, an enjoyable game and one of the best currently available on the Arc.

An enjoyable game and one of the best currently available on the Arc. Note that a number of the questions are aimed specifically at home computer owners!
Logout