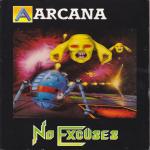 No Excuses is best described as a tactical space-invaders. The aim of the game is to rid an isometric 8 x 8 grid of little green nasties that hover overhead. You play the part of the Strider; a kind of two-legged blue spider that can travel around the grid, square by square.

Aliens can be destroyed by either shooting them when they are directly overhead or waiting until they've landed and then zapping them. You'll have to be quick, as the unfriendly visitors also drop bombs as they descend and fire missiles when they land.

As well as providing you with an early grave, the alien's bombs produce a number of effects then they hit the grid. Each square can be any one of sixteen types. Glue bombs make squares sticky, and the Strider takes longer to cross them. Smart bombs create squares that destroy all aliens that have already landed. One particularly useful effect is the Super square that provides the Strider with his or her own super-person outfit.

When all aliens have been destroyed, a key can be collected, and the Strider can move to the next level. Fifty levels are provided as standard and for those who manage to complete these (or for those who can't!) a level designer is included that allows you to create your own puzzles.

The designer is really easy to operate with the mouse being used to pick squares and position them on the new grid.

Graphics in the game are a simple 16-colour affair, being a direct port from the Atari ST version. The sound is similarly basic, consisting of a few, rather distorted, samples that play between levels.

No Excuses is reasonable fun because it's different to virtually anything else on the market. Once you've finished the 50 levels though, there doesn't seem much to hold your interest. The level designer helps. Rather a disappointing 'sequel' to Rotor.

No Excuses is reasonable fun because it's different to virtually anything else on the market.
Logout