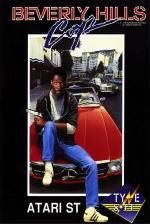 Big movie licences were topping the charts all last year. Robocop, The Last Crusade, The Untouchables and Batman were all transformed on the pixel palette. Released the same year as the film, they cashed in on the tidal-wave of marketing hype and publicity that surrounds a Hollywood blockbuster.

It's strange then that Beverly Hills Cop has missed the hype boat by half a decade. As a result, the programmers have had more than enough time to get it right; the usual rushed programming of film tie-ins as software houses struggle to meet film release deadlines, and the communication problems of programming while a film is still being shot, are no longer viable excuses. So, is Beverly Hills Cop a well-designed and polished product, an anachronism, or just a marketing timetable disaster?

It's split into four distinct games. The first puts Axel on night patrol duty in Beverly Hills. Direct him through a horizontally-scrolling level, shooting at anyone who moves. The objective is to reach the end of the level where a gang are loading crates of arms into a van. The criminals are easily killed with a single shot, but they toss the occasional mine in your direction and if you stand in the wrong place, you're dog meat.

The second game is a car chase. The gang have loaded the van and you're racing after them, but the chase is complicated by them throwing crates at you. It takes some clever steering to avoid them. If you get close enough to the van, try blasting them off the road by shooting the crates stacked in the back.

By the third game, Axel has discovered the location of Mr. Big (yawn). He's holed up in a luxury mansion protected by his gang of baddies. Guide Axel through the garden, indicating his direction by moving an on-screen cursor, and knock out scores of Mr. Big's trigger-happy cronies. Fire by using the same cursor to indicate the direction of your bullets.

At the finale, Axel is inside the mansion searching for hostages held by Mr. Big. In this horizontally-scrolling level you need to kill all the guards and find Mr. Big. When you track him down, he sets off a time bomb. Kill him and escape from the mansion before the whole thing blows sky high.

There's nothing to rave about in the graphics department. The scenes are unimaginatively coloured and badly designed. The Axel graphic looks nothing like Eddie Murphy unless he's suffered a severe bout of anorexia and emerged as a seven stone weakling.

Sound effects are traditional "computer music". The intro tune is taken from the movie but there are no digitised effects at all.

One of the things which made the film so entertaining was Eddie Murphy's humour, but the programmers have closed their eyes to this, focusing solely on the action, and lost all the original appeal. What you're left with is a series of four ordinary games brought under the protective umbrella of a well-known title.

When are software houses going to start utilising film licences instead of hiding mediocre games behind them? The movie was a fast-paced street-sharp vehicle for Murphy's machismo and verbal razzle-dazzle, but the game doesn't have the speed of action or the variety of graphics to even sustain your interest past the first few levels.

The programmers have lost all of the original appeal of the film. What you're left with is a series of four ordinary games brought under the protective umbrella of a well-known title.