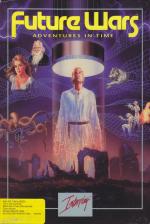 What does Richard Clayderman have in common with aliens from outer space? No, they're not cousins - as far as we're aware - but they are both related to the French record/computer software company Delphine, producers of Future Wars

Future Wars explores the paradox of Time. Aliens and humans are brought together in a search for bombs, which if successful, will save the world. The mixture of Time and aliens isn't exactly original - but in Future Wars it is relevant to the storyline.

Aliens want to colonise the Earth, but we've managed to develop our SDI project to such a degree that they can't get anywhere near us without being zapped to hell. (Aliens I can believe - but a working SDI? Come off it!)

In response they've come up with an alternative plan. They've travelled through time and planted fiendish bombs. The bombs are placed in Medieval, Prehistoric and Future ages and you must explore each of these territories if you're going to make the world a habitable place.

At the beginning you disguise yourself as a window-cleaner to gain access to a tower block - and hopefully discover the aliens' secret plans.

The environment uses the mouse: click left to move; click right and you bring up a set of commands that offer special effects - EXAMINE, TAKE, INVENTORY, USE, OPERATE and SPEAK.

EXAMINE provides a detailed explanation of the area of the map you select. To examine something, you need to move the hero as close to the object as possible. It's annoying when you're forced to move directly in front of it and can no longer even see what you're supposed to be examining! It's best to examine just about everything in each scene, because it's easy to miss something and missing a single useful object can impede further progress.

If an object is important, EXAMINE calls up an additional graphic that gives extra control. When you want to move the scaffolding supporting the window-cleaner, for example, you have to examine it first, which brings up a display of the operating buttons. You are offered two options - one arrow which moves the scaffolding up and the other which brings it down. This is not a lot of use because the only way into the building is up!

TAKE enables you to pick up objects, but again you need to be very close. Unlike other games, you can hold as many items as you wish - but as you use them to solve problems, they disappear forever.

OPERATE lets you use items you're not holding. You could use OPERATE to switch on a tap, say, open the windows and even move the scaffolding which your window-cleaner is using.

Finally, there's SPEAK, essential if you're going to progress far. Click on it, and you can converse with someone. This isn't very productive in itself, but by talking to others you may gain useful information to help you when problems become too tricky.

The game demands imagination from the player even to get from one room to another. The moment you get inside the first office, for example, you're confronted with the problem of how to get through to the next one. If you try opening the door, your boss comes out of another door and kicks you out of the building. The only way to survive is to find a plastic bucket, fill it with water and put it over the second door. Now when you try and get through to the next office, your boss comes out of the other door and is drenched - giving you the chance to get through without being stopped and wet yourself laughing.

Visuals aren't usually important in an adventure game, but they're essential here. You need to inspect everything in each scene, and if you can't distinguish what it is then you're going to have problems. Fortunately the graphics are brilliant and there's no problem in this department.

Play takes place against a static screen with a limited amount of animation overlaid. This includes the hero walking when you click the left mouse button, and a few humorous special effects.

Sound is impressive - Delphine are shortly releasing a CD of all the tracks used in the game. (Richard Clayderman is on their books, but fortunately they didn't book him to do the soundtrack!)

Delphine have tried hard to make the adventure environment of Future Wars as detailed as possible. They've achieved this largely by copying the style of the Sierra On-Line games currently available through Activision. But this isn't a rip-off, since there's much more to Future Wars than pretty graphics.

You're given freedom to explore every nook and cranny in a room, every bush and every tree - you can ever peer down the toilet if you're into that sort of thing. This gives the game great "depth", as it were, and makes it immensely addictive once you're familiar with this kind of environment.

It can also make it immensely complicated. The problems are hard - and I mean very hard. Unless you scour every scene thoroughly they're downright impossible - and searching doesn't end with just a peek through all the cupboards: there can even be tiny items under the carpet. Even when you find all the objects you need, things don't suddenly become easy: knowing what to do with the objects you've accumulated is a massive problem in itself.

Future Wars has enormous appeal for avid adventure fans who are after a game that takes longer than ten seconds to solve. Combine this with its brilliant graphics, and the point/click environment and you have one hell of a game for the adventure pro.

Future Wars has enormous appeal for avid adventure fans who are after a game that takes longer than ten seconds to solve. Combine this with its brilliant graphics, and the point/click environment and you have one hell of a game for the adventure pro.