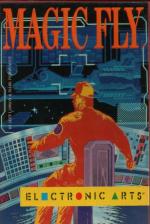 From lightning-fast 3D action screens right through to superb inventory lists, this game oozes technical wizardry. Even Mark ("Seen It All Before") Higham is dumbstruck by the awesome visuals as he clambers aboard the Magic Fly for the flight of a lifetime...

We've recently seen a spate of sophisticated 3D games, which have proved more than ever before that your ST is at the forefront of games development. Resolution 101 boasted the fastest 3D graphics ever, Thunderstrike offered a unique perspective on 3D plains and Damocles took space games into a new dimension with its 3D playiing environment. Now Magic Fly has entered the 3D arena. Take a seat and prepare to be overwhelmed.

You play the role of a futuristic fighter pilot flying the Magic Fly craft. You use this advanced flight craft to patrol the universe and rid it of bad guys. But this is much more than a good-looking shoot-'em-up, because you're not hurtling around in outer space - you're trapped inside a vast underground complex made up of 3D tunnels and obstacles.

Just moving around these tunnels can be a nightmare because you need to make certain you can navigate the craft accurately. Each time you bump into obstacles or hit the sides of the tunnels, you lose valuable life-sustaining energy.

There are five objectives to be satisfied. The first four are to destroy the communications centre, reactor, missile defence system and computer centre. The final objective is by far the hardest. A new breed of space fighter called the Moth has been developed and you need to track it down and scan its design into your computer before blasting it into space. If you're clever you can destroy the entire complex in one go, but you need to discover a fast exit route to survive.

Magic Fly isn't just an unhindered jaunt through some tricky tunnels. Besides negotiating your way around obstacles, you also need to protect yourself from attack by the enemy craft. These craft, named after insects, act in different ways. Some fly straight for you and others cling to the suraces of the tunnels.

Besides the enemy craft there are also static defence mechanisms to overcome, including doors and barriers.

If you find yourself under attack from the enemies or you need to pursue an alien craft, you can always switch on the turbo mode and go hurtling through the tunnels at an unbelievable speed. Unfortunately, turbo mode really eats into your energy levels and if you don't watch them carefully you can run out of juice altogether. If you let that happen you have no choice but to wait in the tunnel for an enemy craft to come along and blast you.

There are a wide range of weapons available to you. The impressive ones use up far more energy than ordinary ones, but they also have the best effect. High-powered lasers can wipe out aliens in an instant and missiles make trash of insects' craft. Besides these, you also have access to a number of special weapons such a proximity bombs which can be left in the tunnel to explode when the enemies venture too close.

The view of the tunnel appears through a small window in the centre of the screen, surrounded by icons and indicators to keep you informed of the state of your craft and to give you access to different weaponry. At any point you can call up additional screens to see a report on damage sustained, energy used or even map of your progress.

The game is controlled using the mouse or joystick, which besides selecting weapons and extra information screens control your speed and direction. Keyboard shortcuts replace many of the mouse and joystick options, making Magic Fly a dream to use.

Since the aim of the game is to work your way through the five objectives, it comes with a save game option. This means you don't need to re-tread old tunnels again and again.

Arresting graphics might not necessarily make a great game, but they certainly go a long way towards it.

The visuals in Magic Fly are outstanding. It's taken well over a year to come up with them, but the 3D representations of the tunnels and the speed of movement of the aliens is unbeatable. You've only got to glance at the screenshots to appreciate how stunning the graphics are, and when you see them moving you just can't help wondering if you really are playing the game on an ST rather than on a full-blown arcade machine. This'll impress your mates!

Spacecraft are solid 3D objects and the walls of tunnels are represented as wire-frames. Although the main action takes place in a small window, you can hit an icon on the display to see the tunnels and craft moving in full-screen mode with no noticeable loss in speed. Though useful, this means you lose access to those all-important indicators about the state of your craft.

A bout of sampled music introduces you to Magic Fly and this is followed by bursts of special effects noises in the game itself. Turn the volume up high and the lights down low and you can really imagine yourself in the role of a ship commander facing a fleet of enemy craft.

Magic Fly isn't so much a game as an experience.

The visuals are undoubtedly some of the best we've ever seen and they go a long way towards making this a hit. Wonderful graphics often mask a poor game and ill-considered scenarios. Not here. Magic Fly is maddeningly absorbing exactly because it has succeeded in coming up with an original gameplan marrying fast-paced action with demanding strategies.

If any criticism is to be levelled at the game then it's only that a lot of emphasis has been placed on making certain you can navigate your way through the tunnels. If you screw this up your craft can end up powerless in no time.

Although this makes it daunting and tricky to use the first time you pick up the joystick, it also keeps the game interesting for much longer.

By the time you're experienced enough at the controls to start using turbo mode you won't have anything else on your mind but mapping out a route through the complex.

If you're looking for state-of-the-art action and addictive gameplay, look no further than Magic Fly. It's the ultimate 3D experience.