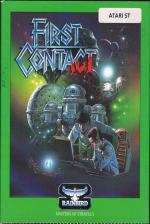 That's the trouble with being a robot. Nobody ever listens to you. After all, when you're trapped inside a space station suffering from the ravages of green aliens, and nobody else, wants to lend a hand, what do you do? Split into three parts and try doing it yourself - that's one way to solve staff shortages!

You're inside a four-deck space station and an alien spacecraft has decided to attach itself to deck A. These green beasts are running loose inside the space station and you have to repair the damage they're causing whilst avoiding getting zapped - an activity which sends your energy levels tumbling dangerously.

Equipment lockers are set into the walls of each control deck and hold various equipment. To use something you must first pick it up, but while the arm droid can hold four objects, the head only holds two and the legs hold none at all. Equipment is important because it's only by assembling the pieces of hardware that you can repair the station.

From a control panel, you select the droid to control. A power indicator keeps you informed of the strength of each droid. This is important because, by colliding with walls or firing at the green aliens, the droid gradually runs low on power. This is restored by stopping off for a refill at a power-outlet.

A panel menu is provided and here you have access to essential utilities. The most complex of these, but also the most useful, is the droid programming routine. Here, you select where the droid should go and what it should do - and actions can even include refuelling. This is achieved by writing a small program, either executed immediately or stored for later use.

To find out what needs repair, you direct the droid to the required wall unit and press fire. If repairs are needed, you'll be informed and given the chance to carry out what's required, providing you're holding the right equipment. Only the arm section can make repairs, however.

There are no massive sprites in First Contact but those that do make an appearance are carefully animated so that the movement of each is very smooth. In fact one of the game's great strengths is the way that the droids move - some parts swing, others shuffle. The backdrops and, in particular, the wall panels are very detailed but this is necessary if you want to know the operations of the panel without selecting to read information about it.

Your droid moves in four directions, but instead of the display scrolling with you, it flicks instead between one screen and another. For example, as you get to the top of the screen, a new backdrop suddenly appears and you're down the bottom. This can be frustrating, since your eye is forced to shift around the screen, but it's surprising how quickly you grow to enjoy it.

As you hold down on the stick to move in any direction, the droid lurches forward, going faster and faster. It takes a while learning to stop it at the correct wall panel because pulling down switches its direction but not, for a while, its speed.

With green aliens and an unusual method of movement you expect First Contact to be all action - until messages start appearing to let you know what needs fixing. This makes for a strange concoction. Attempting to bridge two different genres, it ultimately appeals to neither strategists nor to action lovers.

There are some clever effects, but they still don't amount to a particularly good game. The movement is fun and the lack of traditional scrolling is a welcome change, but the idea of looking for parts quickly becomes tedious.

A promising action game has been wasted on mediocre strategy.

A promising action game has been wasted on mediocre strategy.