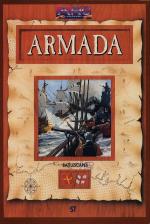 It was easy to fall in love with Borodino, Waterloo and Austerlitz, but there's no escaping the sneaking suspicion that, however technically brilliant Turcan's wargames might be, they just don't offer enough variation. The battles and historical periods have changed, but the visuals remained the same. With his latest release, Armada, Turcan has moved to the high seas and is highlighting the individual movements of ships in an attempt to prove thatwar can be a visual treat as well as a strategic ordeal.

The Spanish Armada was one of the strongest fleets in history, posing a real invasion threat to England. For thousands of men, the battle started out as an adventure but ended five days later as a massive human tragedy.

Now you can replay the battle, assuming the role of either Lord Howard or Medina Sidonia. Turcan tries hard to adhere to reality and as a result the battle doesn't always run according to play. Ships' captains have far more control over their own actions than those in land combat and this can make it difficult to control the movements of those ships engaged in battle.

To attack enemy ships you have three types of fighting manoeuvre - long range, short range and grappling. The cannon ball is used in long and short range ractics while grappling sees you attempting to storm the ship.

To win, the Spanish must capture a major town and harbour and keep a clear seaway for at least three miles. Alternatively, they can win by defeating enough English ships at sea. The English can only win by annihilating enough ships to fend off the invasion.

If there's one thing to send your head spinning in Armada it's the authentic look of the graphics. The battlefield is represented on screen as a solid 3D view which details the land heights, coastline, buildings and ships. Fought at sea, much of the playing environment comprises of visually exciting seascapes which expand the possibilities for strategic manoeuvres. As in previous wargames, sound hasn't been included - which is a disappointment.

The game has preserved all the inflammatory qualities found in Turcan's previous wargames - attention to detail, atmosphere and strategic power - and expanded on them with astounding 3D graphics and a radically different scenario that emphasises ship formations. The result is a game certain to send wargame fanatics into an animated frenzy.

Armada has preserved all the attention to detail, atmosphere and strategic power found in Turcan's previous wargames and expanded on them with astounding 3D graphics and a radically different scenario that emphasises ship formations.