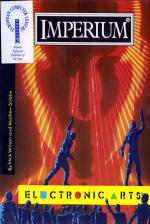 Game designer Matthew Stibbe reckons space has been 'well-trodden'. There are heaps of space games - from shoot-'em-ups to strategies - all bidding to steal Elite's dusty crown. Mark Higham, looking forward to a 1,000 year lifespan, tackles the latest contender Imperium

What made space-trading games like Elite and Starflight so awe-inspiring and successful wasn't their wacky journey into untamed galaxies, but their amazing attention to detail. They placed you in the role of divine leader and you could sit at your ST making life-or-death decisions. Buying, selling and blasting in a provincial solar system in outer space is a familiar scenario, recently refreshed by Starfight, but Elite has always held the crown. Imperium is a space-trading game in a similar mould to Elite and Starflight, and it stands out from the crowd of space-trading games because its astonishing attention to detail throws up all sorts of novel complications.

The objective is to build up supplies of a life-preserving drug called Nostrum and survive long enough to colonise new planets. The game can be won in two ways - either to take control of all the planets or to survive for 1,000 years (the latter being the hardest of the two winning scenarios).

Imperium is played on a screen with a row of 16 icons. By selecting these icons, you make decisions that affect the state of your empire. The game starts after your election as leader of Earth's empire. Your job is to lead your empire to a dominant position in the galaxy by employing a combination of economic controls, military action and diplomatic skill.

There is no set way to play the game. The sixteen icons present you with a variety of options which can be used at any point to build new ships, give orders to the military, change tax levels or read news reports. A separate map screen shows the galaxy and offers additional information about the planets in view.

Talk to game designer Matthew Stibbe and he explains that Imperium scores over games like Elite and Starflight because it doesn't place you in the position of being the divine leader. Every 50 years of game time you need to endure an election and democracy can soon land you out on your ass: end of game.

To ensure election success you need to use your finances to organise a decent campaign. Using one of the icons you decide how much money to put into the campaign: the more money you put it, the greater your chance of success. If you make stupid decisions which could bankrupt your empire or deplete valuable resources, the people can push through a vote of no confidence and once again the game ends.

Massive amounts of time and effort were invested in the user interface. As you click on icons, windows appear offering information for you to edit. Scrolling lists, sliders, text fields and buttons are all available and operate so quickly that Imperium is a dream to use.

As a strategy game it doesn't offer much in the visual department. Aside from a map screen which presents a revolving view of the galaxy, the graphics are limited to windows showing characters' faces and the occasional planet.

Where Imperium scores highly, though, is in its support for monochrome monitors. It becomes a little confusing distinguishing planets on the map screen, but in every other area the graphics are more detailed.

Sound can be switched off, but if you leave it on you hear a fanfare of trumpets every time you look at the news reports.

Although the game is split into three very distinctive areas - political, economic and military, these are all inextricably linked so that the smallest movement in one area affects something else in the other. Add a complex network of interplanetary trade on top of this and you get the feeling you're involved in a massive labyrinth of carefully balanced interwoven relationships.

If any criticism is to be levelled at the game then it has to be that it's difficult to find your way around at first. A tutorial section in the manual gives you some help completing your first turn, but it gives no indication of a long term strategies. A comprehensive tutorial section would certainly have been a help.

The beauty of Imperium is its range of strategies. Similar games tend to take a linear approach that under close scrutiny reveals only a limited number of different ways to win. In Imperium the possibilities are limitless, with all manner of decisions leading to success - or failure. This makes it a great challenge and well worth the enormous investment of time that it takes to complete.

Note: Imperium is one of those few games that works with both colour and mono monitors, and it's therefore set to become a "mono classic". Well done, EA!

The beauty of Imperium is its range of strategies. Similar games tend to take a linear approach that under close scrutiny reveals only a limited number of different ways to win. In Imperium the possibilities are limitless, with all manner of decisions leading to success - or failure.