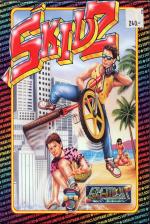 You've overdosed on violence, beaten up street thugs by the score, blasted every mutant thing that moved, and now Gremlin have come up with the ultimate challenge in Skidz - picking up rubbish and putting it into dustbins!

OK so it's not the kind of game likely to have Mrs. Whitehouse foaming at the mouth, but popular titles like Elite's Paperboy and the Summer and Winter Games from Epyx have demonstrated that tame games do sell.

No matter how civic-minded you are, picking up litter is a back-breaking chore, but in Skidz you just sail over the debris on your skateboard or BMX without even bending your spine, collecting rubbish simply by riding over it. Pick up food for energy and clocks for extra sections and steer through eight levels in a dramatic race against time. To be successful you must collect at least 75% of the rubbish and put it in trash cans.

The streets are free of traffic, but your progress is hampered by dogs, cats, holes in the road and pedestrians. Even pigeons get in your way and slow you down.

There are eight levels to negotiate, each one presenting more and more obstacles. With three speeds available, you can build up enough velocity to climb onto the pavements and pick up bonus coins or leap across tricky obstacles.

The eight levels take you from city streets to parkland, beaches and canals. The main character is finely detailed and even extras like the workman with the pneumatic drill are brilliantly animated.

Collision detection is suspect; it's tricky to pick up rubbish even though it looks as if yuo're driven straight over it. But fast, perfectly smooth, eight-directional scrolling makes it a delight to play.

Sound effects are limited to a monotonous tune played throughout. It uses the ST's sound chip and can fortunately be switched off by hitting the M key.

Skidz makes a welcome change from the violent shoot-'em-up currently littering the shelves. The action isn't exactly nail-biting, but it's surprising how absorbing the game becomes once you get accustomed to the uncomfortable control method.

The Epyx set of Summer and Winter Games had enough different challenges to keep you glued to the edge of your seat for weeks. Skidz lacks that variety and quickly becomes repetitive, but for the first few absorbing hours your fingers run with sweat and you refuse to give up the joystick for anything.

Skidz lacks that variety and quickly becomes repetitive. However, for the first few absorbing hours your fingers run with sweat and you refuse to give up the joystick for anything.
Logout