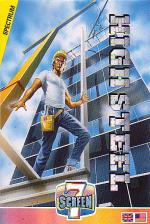 Well it was an original idea at least, but I'm afraid this follow up to Screen 7's spiffy (and rather massive) watery shoot-'em-up Jaws is a bit of a let down. Don your hob-nailed boots, push out your beer belly, tone up your builder's bottom and I'll tell you why.

Imagine a platform game in which you have to build your own platforms! Well, here it is. High Steel is a monochrome, multi-level and massively tedious building bricks kind of game. You play one of the construction industry's highest qualified skyscraper builders. And your aim is to complete the building of a multi-level skyscraper. But building floors is a tricky old business - not just a case of bolting together a couple of RSJs! And to make matters worse, the building site on which you're working is infested with horrible little critters like gremlins, crawlers and spiders, as well as falling bricks and banana skins - all of which conspire to make your job as hard as possible. To cap it all off, the contractors have given you a time limit in which to complete the job. So you better get cracking - it'll be more than your job's worth it you don't.

A crane delivers the girders and bricks you need to build your skyscraper, and it does so at varying rates. It begins quite slowly, but from the second level onwards speeds up. Your aim is to move the building materials around (using the up, down, left, right, fire, pick up, drop control system), erect a row of girders standing in a line and then link the tops of them together by scrambling up and placing a brick on each. There - you've linked a row of them together and completed a floor! Now what? Oh dear, more of the same.

I'll admit, level One wasn't too bad. I managed to work out quite quickly that I needed to erect girders and lock them together with five bricks. But Level Two was murder! The aim there was to build two storeys with five bricks on top. (At least, I think that's what the aim was - working out just what you have to build by trial and error, going methodically through every possible permutation of bricks and girders, just about sums up the whacky high jinxes of this game!) Anyway, assuming I guessed the task correctly, the simplest way to do it would be to complete one storey and then carry the girders up to its top and complete the next one. But I found I couldn't. It was impossible to carry one girder up to the top of another.

Okay, I thought, I'll wait until the crane drops the girders handy-dandily on top the level I've just built, then construct the next floor. So I waited and waited, only to find the crane dropped the bricks and girders everywhere but where I wanted them! I was tearing my hair out before I sussed it.

The only way to complete the level was to erect girders along the whole length of the screen and lock them together! (How are you supposed to get into the building then? Pedantic Ed) Well, you probably can't. But anyway, then and only then, would the crane drop the girders on the top level. Aaargh! Even when I'd sussed it, actually managing to do it took ages. The crane kept dropping bricks just where I wanted to place my last two girders, and each time I managed to shift them and was just about to plonk a girder in their place... the crane delivered another brick there! Double aaargh!

The other elements of the game - the gremlins and bricks that drop on your head and stun you, the mothers and crawlers that are fatal to the touch (but can be killed by being hurled at with a spanner), the spitters that gob acid at you, and the banana skins that slip you up - are but further irritations. When you get stunned, it seems like ages before you can get going again, and even though you can see the bricks and gremlins just about to drop, you can't move fast enough to get out of their way. Double triple aargh!

The graphics are nice, but given the non-scrolling and blocky nature of the game more colour could have been used. All in all then, although the idea behind High Steel is certainly original, I'm afraid the end result is simply tedious and frustrating. Not for those who want to keep their sanity.

An appealing idea that just doesn't work in practice. Dull and frustrating.

An appealing idea that just doesn't work in practice. Dull and frustrating.