Published in Your Sinclair #56 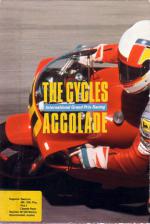 Motor cycle racing, eh, readers? There's nowt to beat it - the thrills, the spills, the sitting astride a throbbing machine in your pervy leathers, whizzing down an open road with the sun in your face and the wind in your hair. Shame about The Cycles then, 'cos this latest motor cycle racing from Accolade has got more in common with a bone-shake round the park on your sister's Raleigh Esprit than a swift spin round the hairpin bends of Brands Hatch! Hrumph.

That's not how things are supposed to be of course. No, in The Cycles the aim of the game is to whiplash round eight authentic Grand Prix circuits in the hope of becoming Motorcycling Champ of the World. But flippin' heck, even before you can rev up and speed out onto the track you've got to plow your way through the usual barrage of 'options'! You know the sort of thing... What kind of race - Practice, Single or Championship Circuit? What kind of difficulty level - Beginner, Levels Two, Three, Four or Pro? What kind of mean machine...? And so on.

Finally, of course, you do get to hit the tarmac, straddled across your bike viewing the track from a first-person viewpoint, which, I must admit, works very well - it certainly makes a change from the usual overhead or view-from-behind perspectives you normally get in these kinds of games. But what follows as you actually begin to manoevre (or try to manoevre) your mean machine around the course lets the whole show down. The simple Left/Right/Brake/Accelerate control system for steering the bike is just so heavy and lacking in an centralising force that it makes the game virtually unplayable.

Imagine, there you are accelerating away from the starting line, with the screen scrolling smoothly towards you, the sun in your face, the wind in... [Yes, yes, get on with it! - Ed] when you see a sharp right-hander approaching on the course map that charts your progress in the top left-hand of the screen. Yikes! Better move over to the left so I can slip smoothly through the bend, you think. Just a quick tap on the Left control and... aaargh! You're right out on the grass verge! Quick, move right to get back on the track. Double aaargh! You're now skidding all over the grass verge on the other side. Basically, you end up spending the rest of the race continually toggling Left and Right to make your wibbly way through the course. Douple triple aaargh!

A responsive steering system is the major element of any racing game. The Cycles doesn't have one. And what that means is that all the other good elements, like the smooth scrolling, the way you can keep an eye on the other competitors with the on-screen 'radar' map, and the variety of races and skill level you compete at, are totally redundant. Nope, stick to your Raleigh - at least you'll be able to go in a straight line!

A motorbike sim with such a wobbly steering system you'll probably feel sick after playing it!

A motorbike sim with such a wobbly steering system you'll probably feel sick after playing it! Stick to your Raleigh - at least you'll be able to go in a straight line!