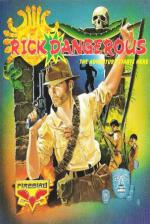 Ever fancied yourself as the brave explorer type? Scything your way through a steaming hot jungle, wading through rivers infested with leeches, fending off the local natives and generally behaving like a hero? Right then. Get all your mum's potted plants, don your khaki shorts and pith helmet, get the cat to prowl around in a tigerish fashion and load up Rick Dangerous, the latest release from Firebird.

Rick Dangerous is the latest four level, flip screen arcade adventure from the newly taken over Firebird. Rick himself is an intrepid explorer, on his latest hazardous set of expeditions. His first takes him in search of the Goolu tribe, a blood thirsty race that lives deep in the Amazonian jungle. But unfortunately for Rick, all his well laid plans go to pot when the plane carrying his explorer gear crashes. Down he comes, bang in the middle of marauding bunch of green Goolus. So grabbing a gun, a large stick and some dynamite (all handy explorer type items) off he sprints, escaping into the unknown depths of a cavernous temple.

Taking control of Rick, it's your task, in Level One, to help him escape the gruesome Goolus by guiding him through the maze of tunnels and past the various hazards that face him, using the relatively simple letf/right/up/down/jump/crouch control system. You can pick up various Aztec style masks along the way and use the six bullets and six sticks of dynamite (which you have with you in each of the four levels) to kill off your adversaries. You can also use the stick which you have with you to paralyse the fiendish foe for a few seconds and make a speedy escape. Or even activate the hidden traps which soon make themselves apparent. At certain points in the game you'll come across little crates of bullets too, so you can replenish some of the bullets you might have used up earlier in the game.

In Level One, there are rolling roots to outrun, concealed blowdarts to dodge, treacherous passages to avoid and of course those ever present Goolus to evade. Levels Two, Three and Four follow Rick on his escapades through spooky Egyptian tombs to creepy castles. And he finally ends up in a well guarded missile silo, which he must blow up.

In essence the game is very simple but actually very tricky to complete. Sneaking along, climbing up and down ladders and avoiding the ever-present patrolling enemies, requires split second timing. And even when you've worked out how to get past one particular hazard and reckon you could do it in your sleep, when you get sent back a little way and have to do it again, you can still make a hash out of it.

Some elements are a little annoying, like when you get sent back a couple of screens, and have to repeat all your moves before getting to the bit where you last got bumped off. Still at least you don't get sent right back to the beginning of the level. And though sound and graphics are pretty basic, with over 80 screens to work your way through and the added shoot 'em up element, Rick Dangerous should provide you with a good few hours of adventuring. So go and slap on that insect repellant!

A trekkin' good arcade adventure. Simple but tricky, with that vital just-one-more-go element.

Though sound and graphics are pretty basic, with over 80 screens to work your way through and the added shoot-'em-up element, Rick Dangerous should provide you with a good few hours of adventuring.