Published in Your Sinclair #40 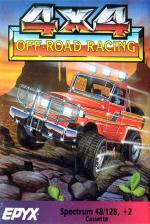 Tough old sport is this 4x4 Off Road Racing caper from Epyx. Armed only with a four wheel drive and a few extra add-ons you must drive through some of the world's harshest, toughest terrain, in search of the elusive Victor's Cup. I must admit the last time I tried off road racing was during a rather hairy driving lesson - when I unintentionally mounted the pavement and drove through 14 flower beds before finally finding a parking space in an ornamental fountain. Driving through Death Valley was a much nicer experience.

You begin the Epyx form of off-road racing, by getting the choice of pitting your car against the elements in four equally inhospitable places - the rough desert of Baja, the (smooth?) desert of Death Valley, the mudflats and hills of Georgia, or the snow and ice of Michigan.

Once you've taken your pick, it's time to choose a motor in which you're going to traverse your chosen terrain, and once again you get a choice of four trucks (why else do you think it's called 4x4?) - a Storm Trooper, Tarantula, Highlander and Kantana. Each truck is rated for seven factors - power, weight, gas mileage, endurance, ease of repair, volume without hood, volume with hood and fuel capacity. Check the factors giver for each truck carefully, 'cos they'll help you to work out which truck is best suited to the terrain you've chosen to race on.

Next it's onto the Custom Shop and Automart where you can kit out your rig with all manner of twinkly motorised parts. Splash out on as many extra parts as you can - spare tyres (Hey, I've got enough of those already. Phil), extra water, fuel and oil - 'cos if you break down you have to do all repairs yourself on the spot. There's no going back to the pits in this race.

Once you've kitted up, it's time to hit the road for some action. Or is it? Well, no actually, 'cos first you've to to load in the next block of code. Sigh. After a bit of chugging and whirring you do eventually arrive at the starting point and the race begins. Vroom!

Speed off down the smoothly scrolling track following the course marked out by the flags or poles ahead of you. Make sure you avoid the cactii and large paw-mark boulders strewn in your path. But if you see what looks like a large cow-pat ahead - belt straight for it and Coo! up in the air you fly. These cow pats are actually boulders, so if you keep using them as launch pads you'll soon find your damage factor rising. But they are useful in certain parts of the race, especially if you find yourself approaching a mud flat, sand dune or snowdrift, depending on which terrain you're racing. Drive straight into one of those and you'll find yourself well and truly stuck. Especially if you didn't fit a winch to your car back at the Custom Shop. You could rock your way out, but progress is painfully slow. So if you see a cow pat on the approach road to a bog, relieve yourself (Oo-er) by hitting it right on (the cow pat that is) and flying right over. Wee! (Stop that! Ed).

Avoiding obstacles isn't the only aim of this game though, 'cos you're also racing against the clock and your opponents. The race kicks off at 8.00 in the morning (That means Duncan's got no chance of winning 'cos he wouldn't even be at the start till 12.00! Ed) and it's your aim to reach the first checkpoint by 11.30, the second by 2.30 and to complete the race ahead of as many opponents as possible. Of course this is easier said than done, 'cos in the rough 'n' tumble world of off road racing, progress is often hindered by damage to your mean machine. This is where the game begins to annoy, 'cos in order to repair any damage, you've got to rewind, load, repair, load again and only then can you continue the race.

It's probably as time consuming as it would be in a real race, and in that respect a good simulation, but... zzzzzzzzzz.

Multiload apart 4x4 Off Road Racing is a good game. The graphics are simple but effective and you get a real feel of movement as your car speeds, leaps, chugs and cruises along the undulating roadway. It's a fun simulation and should provide you with hours of fun. So folks, get out there and get your kicks on route 356.

Not a pure racing game, but a good off road racing sim, which has a lot more going for it than Mark Thatcher did in the Sahara desert.

It's a fun simulation and should provide you with hours of fun.