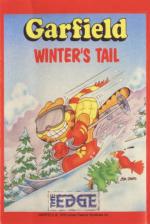 He's back (back, back!). After a wait of nearly two years everyone's fave fat cat, Garfield, has returned to our mean machines, complete with florescent C&A ski-wear (a bit like Matt's actually). Yus, cue Ski Sunday 'muzak' 'cos in Garf's latest arcade-adventure-style game he's off down the piste in search of the abominable Chicken That Lays The Chocolate Eggs. Hem.

Actually, this chicken is all part of a dream that our fave feline is having. It's rather a weird dream, but since it forms the basic scenario of the game here it is. The chicken is holed up somewhere amongst the snow-capped mountains and frozen lakes of the Alps, so Garf, along with side-kick Odie, decides to set out to find it.

At the beginning of the game out hero's seen snoozing in front of a half empty fridge. Three suitably frozen scenes from his dream can be seen in the thought bubble above his head. By using the controls you can toggle between the four different scenes and pick which one you want to enter first. Complete each of these sub-games and you get to finish the game.

The first one you see is the ski slope. Here Garfield has to ski down the vertically-downward-scrolling screen, weaving in and out of obstacles, leaping over ramps and picking up food to maintain his energy, while all the time trying to avoid Odie who's out to demolish the food before he can. His aim is to reach the bottom of the slope and jump the big ramp before his energy runs out.

Sounds tricky, eh? Well, unfortunately, it isn't! The scrolling is slow and the hill is just too easy to get down. The objects can quite easily be avoided, the ramps are too simple to jump and, as long as you ski close to the right-hand side of the screen, scoffing enough food to keep your energy up until you get to the bottom is no problem. Ho hum.

Anyway, complete this section and its off to the piste and into the lasagne factory (which just happens to be at the bottom of the hill) for a quick left-right-left-right-pummelling-the-keyboard-type nosh-up. Get Garfield to eat as much as he can and then it's over to the chocolate factory to make sure the chickens are getting enough Cream Eggs! To complete this flip-screen scrolling section you must pad through the factory, redirecting the liquid chocolate along the pipes to the chickens. You do this by first finding out where the chickens are then by traipsing back through the factory and flicking the switches you find near the arrows that show you which way the chocolate is flowing in the pipe. You'll need to get out your mapping pen to complete this bit, but since the chocolate factory is only about four screens high and 15 screens wide it won't take you too long. This section might be more of a puzzler than the previous two, but the trouble is it's not big or varied enough to keep you interested. Oh well, on to the skating.

This is the final section of the game and so the last bit of Garfield's dream. He can actually see the tracks of the Chicken That Lays The Chocolate Eggs now, but following them and finding the nosh is a different matter. The frozen lake is actually a big horizontally and vertically scrolling maze which Garfield has to skate his way out of - avoiding the cracks in the ice, picking up the food, well, you know the kind of thing.

And that's the basic trouble with Garfield - Winter's Tail. Although there are four different games in here there's an odd kind of similarity about each one. Each section is too unaddictive, small and slow. Mind you, the graphics are a different tin of pilchards - even though the proceedings are in monochrome, Garfield and Odie have been drawn perfectly, and some of the expressions Garfield pulls are actually quite funny. But that ain't enough to save it. No, I think I'd rather sit down with a copy of ol' Bill's A Winter's Tale than this.

A rather crap follow-up to the first Garfield. Nice graphics, shame about the gameplay.

A rather crap follow-up to the first Garfield. Nice graphics, shame about the gameplay.