Published in Your Sinclair #49 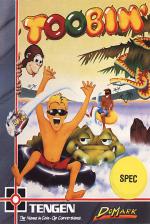 Who'd have thought it, eh? Who'd have imagined you could take something as limiting as floating downstream in a rubber ring and turn it into a fast paced, colourful and exciting arcade game with more thrills and spills than cascading down the tracks in a roller coaster with loose wheels? Well, I dunno who did think if, but whoever it was got things ever so slightly wrong. Wrong in that it's not really that colourful. Wrong in that it's not all that fast. And wrong in that it's certainly not all that exciting! Oops!

Yes, Tobin' is a bit of a disappointment, and here's why. It looks and plays like a budget game (quite a good budget game, it's true), but not a £9.99 product. You know the sort of thing - a long blue strip with a few jagged graphics to form a bank on either side for the river, scarcely-animated main spates and loads of smaller graphics, with very little to do. dotted along the edges.

There are only the three controls (paddle left, paddle right, and 'fire can') which give you very limited control over where you're going. Paddle left and your little arm wiggles frantically, spinning you round in a circle. Paddle right and you do the same thing, only in the other direction. Only by paddling both arms at once do you get anywhere. but even then you're at the mercy of the current, bashing into logs, twigs, islands and other obstacles all over the place. And then, of course, there are the more serious hazards - the crocodile who chases you down the screen and seems to shake you to death when he gets you (quite funny that bit), the fishermen who snag your 'toob', the hunters who pepper you with buckshot and the dive-bombing penguins who... Hold it! Penguins?! Yep, penguins! And cows! And dinosaurs!! I mean, what is going on here?

Well, basically, Bif and Jet, our two toob dudes, seem to have discovered the loopiest river in existence. It takes them through the Arctic, down to the Amazon, and even across the Atlantic to the Nile (where realism goes out of the window and sphinxes fire rays at you!) before, presumably, getting them safely home in time for tea. Blimey!

You'd think I'd have mentioned everything by now, wouldn't you, but no, there are all sorts of other nasties too, as well as odd ways of getting extra points and weapons. For instance. six packs of beer (which you can throw at nasties) crop up now and then, treasure chests float mid-stream and there are oodles of time gates to negotiate cleanly as well (something I found almost totally impossible, but maybe that's because I'm a bit crap).

Basically, it sounds packed with variety, doesn't it? Well, um, yes, it is... in theory. I only caught the coin-op briefly at the PC Show (for some reason it appears to be missing from all our local arcades) but I think the basic problem lies there. The pretty coin-op graphics were dead cartoony and appealing, packed with visual variety, and brought the basically limited gameplay alive. Now were playing the same game in glorious two tone Speccyvision and it's lost out rather a lot. Suddenly it all appears too slow and too samey. It's not that I don't like simple games (I do) and it's not that I found the control system unfriendly (though it was a bit difficult to come to grips with), it's just that nothing about it grabbed me. I started playing with every intention of having a good time, but, unfortunately, Toobin' turned out to be a bit of a good time free zone. We did try it with two player and there was a bit more life to it, but only just.

If a simple game doesn't grab you in the first ten minutes then it ain't going to. Quite why Domark is pushing it so much we can't quite figure, because it looks to us like it's really only a novelty item. Sorry, Tengen, not our cup of tea.

Strangely unenjoyable and suspiciously budgety looking arcade conversion. We usually like simple games, but we didn't go much for this one.