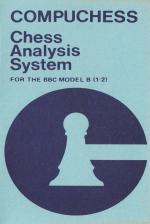 The Chess Analysis System (CAS) is not a chess playing program but a system which allows you to store chess games with comments and variations. The files can be games of your own which you analyse or large files of opening variations which can be bought as extras from the company for well known openings (Ruy Lopez, Sicilian, French Defence, etc). As a one time keen correspondence chess player I thought that this sounded like an interesting idea, but was frankly rather disappointed with the package when it arrived, for several reasons.

Firstly, I think it is quite overpriced. Nearly £12 for the basic (disc) system which simply allows you to enter moves and store them is a bit steep. Asking £4.50 extra for a printer dump which should have been included as standard is outrageous (all it does is to process the datafiles and print the moves in columns of algebraic notation). I also dislike packages with hidden extra costs such as the £2.95 for each datafile on an opening variation (£2.50 if you buy in bulk).

Secondly, the choice of Mode 5 graphics for the screen display seems to me to be a mistake, accepting low resolution graphics to permit non-essential extra colours. I found the graphical definition of the pieces rather poor and could not easily distinguish kings from queens. Game moves can also only be entered in algebraic notation with no cursor control option. The contrast with the crisp Mode 4 displays and friendly input handling of White Knight, which I was looking at at the same time, was quite striking. A third weakness was the sparse documentation which did not accurately describe the programs - I eventually found a small, easily lost errata strip.

The use of an interactive chess analysis system with graphical display is nice in principle, but it has inherent limitation even if the package was of better design than the present one. Serious chess players consult huge volumes on opening theory with many thousands of variations. It is not practicable with a small computer to handle such a large database.

The main practical use of a system like this would be for a player to analyse his or her own games and to prepare datafiles on very specialised, personally favoured opening variations. One advantage over a book here is the ease of updating the file when a new game between chess masters adds new knowledge to the variation. A keen player might find this program useful in this respect despite the limitations that I have discussed.

A keen player might find this program useful despite its many limitations.
Logout