1st February 1985
Know Your Own Personality
By Mirrorsoft
•
BBC/Electron 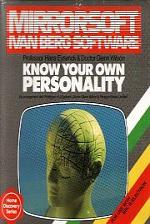 Software for home users of micros falls into three main categories: games, educational software and business type programs (wordprocessors, database programs, etc). The last type are probably of use only to a minority of owners and generally require expensive peripherals such as disc drives and printers.

Computers, especially the BBC, may often be bought with educational applications for the children in mind, but one suspects that in many households they end up mainly as games machines.

Mirrorsoft, with their Home Discovery Series (available on tape at £9.95 and disc at £12.95), are trying to provide a different type of software: definitely not games, "serious" in terms of home use but not claiming to meet business standards (or prices).

The program reviewed here, Know Your Own Personality, certainly shows high standards of program and documentation design. It is a revival in electronic form of Professor Hans Eysenck's highly successful Penguin book of many years' standing. Eysenck, a prolific publishers of scientific papers and books, is probably one of the best known psychologists to the lay public due to his regular excursions into popular writing.

The program administers and scores three personality tests concerned with Extraversion/Introversion, Emotional Stability and Toughmindedness. Each test involves the user in providing yes, no or don't know answers to 210 questions. Owing to memory limitations each loads in three sections of 70 questions. Neat Mode 7 screens are used to present the questions, though the answers keyed in are not displayed and there is no chance to correct or edit them. This is probably a good thing, on balance, since the necessary procedures would make an already long test pretty tedious.

After completing a test the data is instantly analysed and displayed in terms of a number of personality "traits" related to the main dimension. For the extraversion test these include activity, sociability, risk-tasking and so on. Your results are shown graphically as deviations from the population average, with brief comments on each trait score if it deviates significantly from the average. There is an option to dump these displays to a printer, if you have one, and to save the data you have entered to tape/disc.

As a professional psychologist myself, I am probably not the best person to judge the comprehensibility of the documentation on personality testing by Eysenck and Glenn Wilson. However, it seemed well written to me and to strike a fair balance between the dangers of simplicity on the one hand and blinding with science on the other.

Of course few issues are uncontroversial in an academic psychology and there are certainly critics of the approach to personality taken by these authors. However, the user is warned in the program and documentation not to take the whole exercise too seriously.

In taking the tests, the relevance of some items will appear obvious, but others much less so. The intuitive relevance or "face validity" of the items is actually not very important because of the way in which such tests are constructed.

The field of psychology concerned with mental testing, called psychometrics, has a long history and well established methodologies. The accuracy of such tests is divided between "reliability" which is the stability of the test, or the consistency with which individuals would receive similar scores if tested more than once, and "validity" which is the degree to which the test measures what it claims to measure.

Constructing reliable and valid questionnaires is a very time-consuming and expensive business, the details of which I do not have space to describe here. The only reason that the micro owner can receive this type of software so cheaply is that it is a "spin-off" from research already conducted for other purposes.

Psychometric tests which reliably discriminate abilities and personality traits between individuals have a number of serious applications, for example in selecting people for different occupations or choosing appropriate educational programmes or psychotherapies.

At present the advent of cheap microcomputers is causing a methodological revolution in psychometric testing. Automating questionnaires and revalidating them under computer-controlled presentation is receiving massive attention.

The classical dilemma has been that tests conducted by psychologists personally are more reliable but pencil and paper tests much cheaper and more convenient to administer. The use of micros seems to resolve the program since the technique can cheaply improve on the reliability of the former questionnaire methods.

Also the computer may take additional measurements, such as decision time, which would not have been possible previously in the absence of a professional tester. Many, however, feel that there is a disturbing implication in all this. If your child develops serious behavioural problems do you want him or her to be seen by the educational psychologist or referred to the school's computer?

Returning to the program, I suspect it may be popular owing to people's fascination with trying to understand themselves. There is, however, an intrinsic problem with this type of program. What do you do with it once you've done it once?

Some suggestions are made in the documentation, e.g. compare your personality with that of your boyfriend/girlfriend, spouse, etc. Try filling it in as if you were him or her and compare it with what they do themselves. What happens if you find out that you are hopelessly incompatible, I wonder?

Does this program perform the opposition function to Eysenck's The Dating Game and split couples asunder? Well, if you take the program that seriously there must be something strange about you to start with!

I do suspect this program may be popular owing to people's fascination with trying to understand themselves.