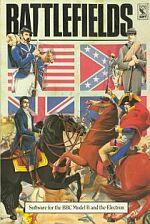 This is an excellent buy. Battlefields consists of two separate war games by Ian Trackman on one tape, which sensibly may be transferred to disc with a supplied utility. In view of the traditional appeal of board games, it is really astonishing how few computer-controlled, two player strategy games are available. The computer has great potential value in such games since it can create a simulated environment in which players can enter decisions in ignorance of the other's input, and then have the computer calculate and demonstrate the consequences. Both of Trackman's games have this general structure, though they are otherwise quite different.

One game is based upon the American Civil War and the two players command the Confederate and Union forces. A map of the USA is displayed and each player must enter a number of moves for each army over a period of eight game months. After each player's input the computer shows the effect of each unit's move one month at a time. If armies move to the same square conflict occurs, but a much more subtle element is introduced by designating certain cities as supply centres. If such a city is captured then all units based on it are removed, wherever they are currently located. The need to keep the right balance between attack and defence makes for subtle strategy, augmented by variations in terrain and the presence of strategic strong points.

The other game, Waterloo, is less immediately appealing, but ultimately more addictive. Here, the players take on the responsibilities of Wellington and Napoleon, playing in a much smaller scale of time and space. Decisions are again made about movements of units, but this time the position of enemy forces is hidden unless revealed by intelligence reports. These depend upon proximity and relative strengths of opposing cavalry. Great skill is required to judge the likely position and movement of enemy forces and to coordinate one's own armies to maximum effect. The mostly hidden positions of enemy forces allow bluffing, laying of ambushes and so on. Extra interest is added by occasional orders going astray with random troop movements resulting.

The use of sound in the two games is very limited and the Mode 4 graphics nothing special, but they are adequate for understanding the play, which is after all conducted at a cerebral level. My only technical criticism is that no save game facility is provided for either program, despite the fact that several hours of play may be needed to conduct a successful campaign. This quibble aside, Battlefields is strongly recommended.

Strongly recommended. Great skill is required to judge the likely position and movement of enemy forces and to coordinate one's own armies to maximum effect.