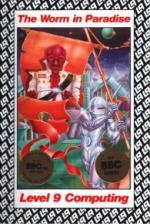 I loved Snowball but wasn't quite so keen on the sequel, Return To Eden. So what's the verdict on The Worm In Paradise, the final part of the Silicon Dreams trilogy? In a word - superb! The best Level 9 game that I have seen to date. This is the sort of game that induces obsessional interest and social irresponsibility in its players. For instance, my wife and I started to play this on a Sunday morning and continued for about 16 hours, while the children ran riot and cooked their own meals in desperation!

Did we solve it? Well, not that day, but we did eventually play through the whole game - with the help of Level 9's hint sheet of course. There may be people around who can solve their games without the clues, but I've never met any. Personally, I would rather "cheat" a bit and see the whole game than give up in frustration.

Worm is set on the Planet Eden some time after Kim Kimberley's earlier adventures (it doesn't matter if you haven't played the other games). This time you are not Kim but a citizen of a repressive society run by one of her/his descendants. For those, like me, who found Return To Eden excessively vegetarian, I can assure you that the settings of Worm are mostly urban, after a magnificent starting sequence in a garden of Eden. For those who enjoyed searching the vast set of locations of Snowball, there is also a similar puzzle in Worm involving thousands of colour-coded "habihomes" in which the citizens live.

The game also has some unusual features in that it is necessary for the player to earn money ("creds") which can be done in several ways. You are also discouraged from carrying too many objects about by frequent encounters with fuzbots (police robots) who fine you for illegal possession. I don't know whether the game had a carry limit - we couldn't afford to find out!

As ever, Level 9 have packed an enormous number of challenging and varied puzzles into the game. The parser has also been improved according to the blurb, though I personally prefer to use simple two word inputs most of the time. Incidentally, Level 9 have not attempts to put graphics with the BBC version this time, so the Beeb's memory gets fully used for the text.

In summary, The Worm In Paradise builds well on the atmosphere created by the earlier games, but also stands alone as one of the best adventures available for the BBC Micro.

Builds well on the atmosphere created by the earlier games, but also stands alone as one of the best adventures available for the BBC Micro.