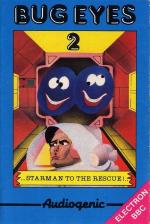 Remember Bug Eyes by Icon Software which starred Starman? It didn't receive very good reviews but I always thought it was an enjoyable game with very good graphics - so I was pleased to receive its sequel named Bug Eyes 2 - Starman To The Rescue for review.

The game's overview on the inlay card tells you that your mission as Agent Starman is to penetrate the defences of the Xxabanean flagship and collect 25 keys required to free Zelda from her intergalactic prison.

By this time, you might be wondering "Could this be a Manic Miner clone?" Well, I'm afraid it is but it is very definitely one of the best of its genre. Its high quality is apparent from the moment the title page - which is rather a grotesque image of Bug Eyes - is loaded. As the main program loads the filename changes with each block to reveal credits to the people involved in the design of this game.

When the game finally loads, you are almost certain to be astounded by the very large, bold and imaginative characters. And they move quickly and smoothly without flicker. On the Beeb, there's also continuous background music by Ian Waugh.

Starman may be moved left and right but unlike the usual Miner Willy clones, you can't jump. Instead, you have to rely on lifts or strange blue blobs which whirl around the room in unpredictable fashion.

Although the documentation doesn't boast about the 'huge number of screens crammed into the Beeb's titchy memory in the usual manner, I've explored quite a few and there's a large variety of hideous creatures which deplete Starman's energy if touched. Even a Sinclair C5 makes an appearance as an advanced form of transport!

All in all, a very slick and additive game.

All in all, a very slick and additive game... Even a Sinclair C5 makes an appearance as an advanced form of transport!