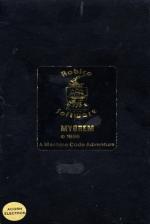 I am delighted to report that, after the rather disappointing experiences of Lord Of The Rings and Demonic World, Robico has once again come to the rescue with their latest offering well up to their usual high standards. Myorem is the third game in the Rick Hanson trilogy - the other two being Rick Hanson (which I originally reviewed under the title Assassin) and Project Thesius. The original game is one of my all time favourites and it has been my pleasure to follow Rick's hazardous career in the subsequent games.

In reviewing Project Thesius, I was a little concerned that BBC owners were getting essentially an Electron game (albeit a very good one) with reduced program size and screen display quality through the use of Mode 6 rather than 7. Although Myorem is available for both machines (and fully Master-compatible), I am pleased to say that Mode 7 text with its enhanced resolution and colour variation is automatically selected for BBC owners. Also, the game is larger than a standard Mode 6 display permits, so Electron owners have to put up with junk on part of the display as some of the Mode 6 screen memory is used by the program. I doubt that Electron owners would want to miss any of this excellent game, so I don't think it will cause too many complaints.

For the uninitiated, Rick Hanson is a fearless secret agent who survives (if at all) on his wits, on a sequence of dangerous missions. In Myorem, Rick starts off in a right old mess, even by his standards. You (adopting Rick's persona) are tethered to a post in a dusty yard, seconds from being shot - and what's more, you cannot move or do anything! Don't panic, though, you can at least reflect on how you got into this mess - attempting to organise a coup in Latin America and getting yourself captured. However, you did manage to escape and your reminiscences take you to a ditch from which you must play the game - entirely in flashback, as it were.

Escaping from the ditch itself proves to be an excellent puzzle and a good illustration of Robico's technique of adventure construction. You start with access to a very limited number of locations and objects, but you know that it must be possible to solve the initial puzzle (escape from the trench) with what is available. This is much fairer - and more fun - then the type of game which allows you access to many objects and locations without making it clear what you are supposed to be doing.

In general, Robico games are fairly sequential in construction, such that you solve one stage at a time and know when you have completed it. Their puzzles are also logical and avoid the arbitrary or magical solutions so common in other games. This means that experienced adventurers, at least, should be able to get through the games entirely with persistent effort and not too much help.

Once out of the trench, a much larger area is accessible for exploration. The scenery consists of forests, mountains and river country. There is a cabin where you need to break into twice by different means! There are also two mazes, neither of which requires tedious mapping by the dropping of objects. One can be solved merely by being sufficiently observant, whereas the other requires reference to a map. The only snag is that you have to solve different puzzles first to find the map and then to discover the means of reading it.

If you figure all this out, the consequence is that you get captured and end up inside a mansion belonging to some drug-smuggling types from which you must make the final escape. All your possessions are lost, so this feels almost like a new mini-game. There is quite a large area with a number of puzzles to solve here, including a very nice variation on the old source of light idea. As with previous Robico games, I managed to play right to the end, so I know whether or not Rick met his apparently sticky end. But of course, I'm not telling...

Robico tells me that Myorem is their most advanced game technically, with a record amount of text (60% compression) and a very sophisticated input parser - I wouldn't know, I'm a two word adventurer personally. I am, however, much more concerned with the playability and enjoyability of an adventure game. Does the text stimulate my imagination? Do the puzzles intrigue and amuse me? Do I really get involved, as with a good novel, and feel as though I have really had an adventure? As with previous Robico games, the answers for Myorem are emphatically yes in all cases. This is a super game, way above the standards of most on the market, and definitely not to be missed.

A super game, way above the standards of most on the market, and definitely not to be missed.