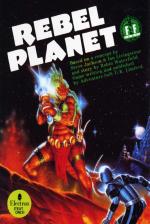 Games converted for a number of machines are often presented rather sloppily in the BBC version, but no complaints here. Rebel Planet makes good use of Mode 7 coloured text and windowing and even a little use of sound. So far as we got with the game, we found it rather unusual and generally most enjoyable, but without clues we were unable to complete the game and discover its full extent.

The scenario is typical science fiction. You must travel to a number of planets in turn, eventually penetrating the security of the dreaded Arcadian Empire to assist the embattled resistance. The spaceship travels on a pre-set schedule so you must complete your adventures on one planet and return to the ship in time for the next flight. The problem-solving was generally at a good level of complexity (not too arbitrary), although there seemed no way of knowing whether you have done everything necessary on one planet before moving on.

Since the moves are irreversible this seems rather unfair. However, our general verdict is favourable and we hope that US Gold will continue to convert American games for the BBC market which can do with all it can get.

Problem-solving is not too arbitrary, although there seems to be no way of knowing whether you have done everything necessary on one planet before moving on.