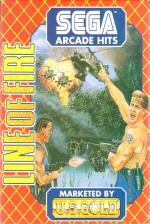 This is just a straightforward blast-everything game. The original Sega arcade version of Line Of Fire was eminently playable and had everyone hopelessly addicted, but the sprites were big and producing a successful conversion always looked tricky. Sadly, it hasn't gone at all well.

The game is split into levels with an end-of-level alien at the end of each - now that is a surprise! Throughout the levels you scroll forwards into the landscape, confronted by a stream of terrorists, missiles, helicopters and bombs. You move some red gunsights around the screen, point them at your target and fire. The mouse is the best way to control the sights but you can use the joystick at the same time if you wish. In this way, two players can play simultaneously.

When you run over any bombs or sustain a hit, a message appears on the screen informing you of damage. You can recover by picking up the occasional medical kit, but you must be careful - often you blast these kits by mistake.

You only need to take a glance at the screenshots to appreciate that the visuals are very striking. What you don't see, though, is the insanely slow speed at which they move. The attention to detail, especially in the parallax-scrolling backgrounds, is superb - but there are very few frames of animation used in the movement of either the enemy sprites or the central playing character. Combine this with the appalling speed of the game and you have something that is so unplayable, it's a torture to try.

The final nail in the coffin is the way you lose sight of the cursor, with devastating results. The tiny red crosshairs get lost in all the blasts, and before you can find them again you often find yourself dead instead. That's adding injury to insult, and then some.

Sound effects are the usual kind of spot explosions and ineffectual noises which have you quickly reaching for the volume control. Believe us, you don't want to listen to these!

What is happening to US Gold? A software publisher that once used to produce some top games like Operation Stealth, Strider and The Last Crusade is turning out crap like E-Swat and Line Of Fire. It's appalling enough that they should choose such games to release at the most competitive time of the year, but what's even worse is that they're trying to charge £25 each for them. What a rip-off!

Line Of Fire is a horrendous game, and nothing like its hugely absorbing arcade parent. The scrolling is ridiculously jerky and the animation is almost non-existent. As if that wasn't enough, it's a travesty that the action pauses while the bad guys are loaded from disk.

The game's biggest problem is speed: it's so appallingly slow that it just isn't playable. There's little here for anyone, even the most forgiving novice. If you lash out on this one, you're going to seriously regret it.

This is a horrendous game. It's nothing like its hugely absorbing arcade parent and there's little here for anyone, even the most forgiving novice.