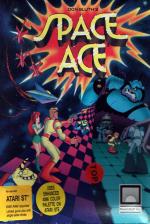 Imagine a game centred around a cartoon theme with animated Superheroes ruling the planet. Add to that a brilliant Disney animator, a stunning soundtrack, a degree of player-interaction and extend the whole thing across an amazing 33 levels and you have the most startling visual feast on an ST game ever!

The objective of Space Ace is typical Superhero stuff: the evil Borf is threatening to take over the world and only one person can save it from his clutches. That person is you - Dexter! Unfortunately, before saving Earth, you have a recurring distraction to overcome - the delectable Kimberly screams in your ear to save her after every scene.

The plot sounds exciting and opens up enormous animation possibilities. To a large extent, the game delivers, but it fails in player interaction. You watch the scene of animation, lasting around 45 seconds, and simply make the correct joystick response at the right time.

Skill is limited to remembering the right moves whenever Dexter looks like he's in distress. These moves direct him into any one of four directions and the fire button causes him to whip out his laser and blast it. Only one move is correct and if you make the wrong choice Dexter meets his doom. Make the right move and you continue to the next danger point. Some levels require three moves to be made before they can be completed, while others only take one.

Each level therefore has only two possible endings - one in which you continue and the other (far more interesting) where Dexter dies in all kinds of dramatic incidents: blasted, crushed or drilled into the ground.

For example, in level one you confront Borf, who fires at you with his laser. Just before the third laser shot, move right. Dexter jumps behind a large rock but Borf fires at it, blasting it to pieces. Before Borf fires again, move left to make Dexter jump into the centre of the screen. As Borf moves to fire again, move down, Dexter hides behind the rock again and the level is over. If you make a mistake at any of these points, you don't realise it until Dexter gets blasted by Borf at the end of the scene.

When Space Ace begins you have three lives but with every 10,000 points you receive an extra one. The game comes on four double-sided disks but this doesn't mean single-sided owners don't get a bit at Borf. With half of the levels contained on the second side of the disk, single-sided owners are restricted to half a game but that's better than nothing at all. Readysoft haven't stopped at adapting the game for different types of drives, they've also written a version which runs on monochrome monitors. It isn't available at the moment but should be along by the end of May.

There's no doubt the brilliant visuals are Space Ace's strong point. So far, we've seen nothing else like it on the ST - this is professional animatioon on a home micro and it looks bloody amazing. The characters move smoothly, colours are bright and exciting and all movement is exaggerated in the same vein as illustrated comics.

The great effects don't stop with the animation. Accompanying the entire game is a high-quality sampled soundtrack which adds cartoon-style sound to Space Ace's cartoon-style visuals and effectively draws you into the action.

No-one is going to tell you Space Ace is amazingly playable - if gameplay was all it had going for it, it would disappear behind a mass of laser sparks and never be heard of again. It's the incredible animation that makes it unique. Watch the game and you'll be stupefied by the spectacle; try playing it and you realise its limitations. Mastering the joystick moves is a case of trial and error rather than skill and the save game option means you complete it within hours of ripping off the cellophane, dramatically lessening its long-term appeal.

The results is not so much a game as a demo - with annoying breaks where you're supposed to move the joystick to advance. If you want to show off your ST's animation capabilities there's no better game, but as for playability - it sucks.

If you want to show off your ST's animation capabilities there's no better game, but as for playability - it sucks.