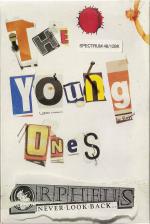 Cliff Richard doesn't get thrown out of the window but if you want to get the zits off your botty this program will show you how.

The Rather Elderly By Now Ones has finally arrived, complete with lots of hype about a wonderful new artificial intelligence routine called Puppetmaster. It's Orpheus' word for the bits of the program which allow the four characters to each do different things at the same time.

What you see is two rooms at a time of the Young Ones' house, and the four characters - Neil, Rick, Mike and Vyv - moving around. At the top of the screen a series of menus appear, offering various commands like 'walk', 'talk,' 'open' and so on, or a list of objects to pick up and use.

You choose which character to control for the game, and although the objective is the same - to get out of the house - each character has to solve different problems and collect different objects to do that. The ultra-violent Vyv shoves his collection into a bin-liner, for example, while Mike will stash his supercool gear into a suitcase. Vyv is supposed to be the easiest character to play, according to the hint sheet, but all the problems seem pretty tough to me.

Buffs may start muttering Everyone's a Wally to themselves at this point. Certainly there are no arcade skills - everything depends on finding the right objects and using them in the right way. Neil uses the lighter to light his joint, which is obvious enough, but who's going to guess that the cat likes peas which must be defrosted with a blowtorch first?

The graphics are not immensely impressive. I found myself more or less ignoring them most of the time and concentrating on the menus which made the game feel like a particularly stunted adventure. Some of the objects are only recognisable when you match them up with the list at the top, and many have an alarming habit of disappearing if you 'open the bed'. While there may be a reasonable explanation for that - it certainly seems to be part of the problem solving - there's no sense of realism in it.

Characters speak, which gives them genuine characters of a sort. Rick says things like, "It would be really anarchic to pick up the kettle." while Neil might say. "If I don't pick up the chainsaw no-one else will." The words appear in speech bubbles, which hover in place for a bit while the character walks out from under, again spoiling the feel. They do however give clues about what's going on - you might discover that Mike has picked up the seeds which you, as Neil, want to put in the grave. "We sow the seed, we grow the seed, we eat the seed..."

Not really. Orpheus has put a lot of effort into explaining how wizard Puppetmaster is, but what it really boils down to is a point system for various actions so that characters will tend to do things which have a high point value for them. The idea is as ancient as Galaxians, though I still love watching computer-controlled characters picking up and dropping the same object over and over again because the software can't think of anything better to do.

The humour works best if you know the series well. Alas, it's some time since the programmes were shown, and memory fades. I did recognise a few of the objects - SPG the hamster, the golfball in the toilet and Neil's grave-digging reverie, among others. If you're not familiar with the characters, you'll have trouble working out who does what.

The trouble with these ambitious multi-character programs is that, while there may be masses of brilliant code designed to imitate artificial intelligence, you never really appreciate it when you play. As it is, you're left with disappointing graphics on a rather chaotic game.

The one unusual feature is the way other characters interfere with you, stealing your objects and telling tales on each other. That lends extra dimensions to the strategy, but can also frustrate a carefully plotted solution.

If you want this sort of stuff, then the Wally games or Brian Bloodaxe may be more accessible. Fans of the series and utter bastards with spotty bottoms who write revolutionary poetry about Vanessa Redgrave should add another star to the rating and take a sledgehammer to their piggy-banks.

They'll love it - lentils, girlymags, dead rats and all.

Disappointing graphics... and a rather chaotic game. The one unusual feature is the way other characters interfere with you, stealing your objects and telling tales on each other.