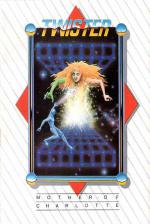 A WONDERFUL piece of rampant nonsense from System 3, Twister was extensively previewed last month, so here's a brief run-down for those of you who missed that issue - shame, shame! Not much has changed between the early version I saw and the final game, which is essentially a shoot-'em-up with some very imaginative graphics.

Twister is a giant serpent, said to be the root of all evil. She sleeps the unquiet sleep of the utterly depraved in the middle of level six, but you'll have to fight hard to get to her.

Each level involves collecting a number of symbols, which combine to form a psychic weapon whch kills Twister. Those are card signs, the planets, the zodiac, and the parts of Twister's human body and her name.

The first level has you jumping stepping stones. The second consists of two broad paths, one at the top and the other at the bottom of the screen - you flip between the two as you move. The third and fifth are straight roads, rather like the Star Wars Death Star trench games, and the fourth has you roaming all over the screen with a jet-pack, looking for the planets.

The mechanics are simple. Kill three nasties and a symbol will, sooner or later, appear. Ammunition is replenished by passing over a little heap of bullets, energy, by collecting shields.

You must also avoid the horseshoes, which will confiscate one symbol if you touch them, and the little rockets, which drain your energy.

What makes the game is the highly charged depiction of the various demons which oppose you. These are mainly based on standard horror images - flabby ghouls, satanic goats, evil faces hovering in darkness, and oddly, the hookah-smoking caterpillar from Alice in Wonderland. I particularly enjoyed the obscene figure of Charlotte herself, all hooked talons and dangling dugs, as well as the whip-wielding demon on level two.

There are extra details - winking eyes and a little skull-and-crossbones when you die, as well as a very pretty high-score table with a sort of fireworks display going on behind it. The monsters tend to attack in different ways - watch out for the devil's spitball which turns into a slinky spring and then pounces on you in a deadly trap.

All the monsters are bright green, which lends a sinister effect to the game. The final figure of Twister, coiled about her spiky ball and occasionally unwinding to hiss and yawn, is most impressive indeed.

A really good shoot-'em-up is always welcome - light relief from all the soft operas so much in fashion these days. Twister has all the vital ingredients - excellent graphics, good gameplay, varied tactics and an addictive theme. Very nasty indeed.

Twister has all the vital ingredients - excellent graphics, good gameplay, varied tactics and an addictive theme.