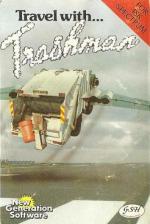 RUBBISH AROUND THE WORLD

Obsessed with rubbish after a lifetime of emptying the bins of suburbia, Trashman, that Napoleon of garbage, is off to foreign parts to teach the world a thing or two about litter.

Travel With Trashman sets our hero the mission of flying to various famous tourist spots to deal with the rubbish problem. They include collecting roses from a Spanish bullring, coconuts from a Samoan beach, and secret papers fluttering from the windows of the KGB offices on the Red Square.

Trashman was greatly admired for its superlative graphics, but unfortunately the sequel does not match the earlier program in that respect. It is true that the thirteen screens are all completely different, whereas Trashman was built around various streets using the same few houses in different configurations, but there are too many occasions where colours flicker and change messily. Were that not the case, the graphics would be excellent, but as it is you are forced to conclude that New Generation has overreached itself slightly in designing screens too complex.

That does not, however, make the game any the less addictive, and on that score Travel with Trashman is a worthy successor to the original. You start with a fixed sum of money, with which to buy a ticket to a variety of destinations. The money is replenished according to your success in clearing up the rubbish at each location. That allows the player to try at least three screens immediately, even though unable to complete them. It also requires some tactical thinking from the more experienced player, in order to travel as cheaply as possible while still visiting all the locations.

As ever, New Generation has included its own style of humour in the game, not only with the visual gags about what constitutes foreign rubbish, but also with comments on the screen. The comments occur when Trashman bumps into the locals while attempting to do his job, such as tangling with French waitresses at a Parisian cafe, or upsetting the efficient service at the Munich beer festival.

Most of the humour is based on excruciating language jokes, such as 'Gettenze artz a vay' in Germany. By and large, the jokes are inoffensive, although more likely to produce groans than laughs. However, the scene in Benares, where Trashman has to collect the sandals of the faithful as they immerse themselves in the Ganges, is rather more disturbing. Apart from the concept of making fun out of religious beliefs, which also occurs at the Wailing Wall in Jerusalem, the line 'Hurry curry Trashman' is at best puerile and at worst offensive. If that was the best the company could think of, it should have left the screen out altogether.

If you are impervious to that sort of humour, and do not expect miracles of graphics programming, you will find the game great fun to play and highly addictive. There is a considerable range of difficulty in the various screens, and although the mechanics of picking up litter remain the same, you will have to change your tactics to suit each particular situation.

It is a pity, therefore, that New Generation could not have taken more care with the graphics and humour.

It is a pity that New Generation could not have taken more care with the graphics and humour.