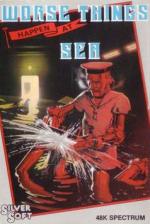 IN THE LATEST hit from Silversoft, Worse Things Happen at Sea, you are a ship's android, with sole responsibility for the safety of the ship as it ferries its cargo between two ports. Unfortunately the vessel is not merely leaky, it is a positive sieve. There are two decks and you must travel backwards and forwards patching up the boles and pumping out water.

The screen shows a crisp picture of the compartment you are in, and gives information concerning the status of your engines, whether you are off course, and an overall plan of the ship.

As the game progresses the hull springs leaks, with cartoon-hke fountains bursting out of the floor. Those can be capped with a limited supply of plates, and there are also pumps which you can oper ate to remove water. You will find yourself rushing madly around the ship trying to stem the encroaching seawater; be careful opening doors between compartments as you may simply spread the water around.

The main criticism is the lack of provision for joy- sticks, although you can choose from a set of six key configurations, which should work with most joysticks as long as you know which keys your joystick uses.

Worse Things Happen at Sea is exciting to play, difficult to beat, and unusual in concept. Despite the joystick quibble, worse things have happened in computer games,

Exciting to play, difficult to beat, and unusual in concept.