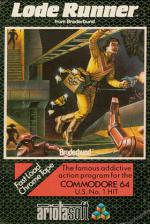 Deep in the Bungeling Empire lies a fortune in gold, stolen by power-hungry leaders, and guarded by enemy soldiers. Luckily a highly trained Galactic Commando, such as yourself, is on hand to recover every single ingot from the massive, and perplexing, underground caverns.

There are 150 screens of Panic-style action in this game, the difference being there's a lot more panic. Each screen consists of a number of gold chests scattered about, which you must collect to move onto the next level. But they are protected in devious ways. Some are embedded in seemingly impenetrable brick, others by apparently uncrossable gaps.

Usually there are ladders of various length joining any platform formations. Horizontal bars of differing length are also usually present, and you can swing your way along these hand over hand.

On some screens there are hidden trapdoors to fall through. They look exactly the same as normal, diggable brick, but have the annoying property of being where you least expect, or want, them. Thankfully they appear at the same place on the same screens, so if your memory's good...

Getting the chests is not so easy though. A group of guards patrol the screen, all after your blood, and are far more intelligent than your average alien. These guards occasionally pick up a chest for themselves and must be tricked to falling into pits which you dig with your laser drill pistol. Any gold carried by them will then be released for you to pick up.

You, and the guards for that matter, can fall any distance without dying. This proves useful should you become surrounded as you can dig a hole and fall through it to the next level of platforms. But beware, some bricks are undiggable.

All of the screens have been designed with the utmost cunning, and prove difficult and enjoyable to play. The facility exists to make your own, equally baffling, screens of action should the present set become at all tiresome (see below).

There are also a wide range of gameplay options. Keyboard or joystick control is accessible at any time throughout the game. If all is lost and your man is trapped without any means of death or escape, then there is an option to abort that particular life.

It's possible to alter the overall game speed, pause and restart the game, You can toggle the direction that you dig (either in front of or behind you), or terminate the current game should you get too annoyed with your performance.

There are also two cheat options, with which you can add additional lives or advance levels. However, should you resort to using either you won't be registered on the high score table.

With all these overwhelmingly good points it seems difficult to fault Lode Runner in any way. Nevertheless, the sound and graphics must be criticised for their crudeness and simplicity, and the loading of levels for its laborious technique.

The sound consists of little other than a few quirky tunes on completing levels, and some bloops and beeps thrown in for good measure during the game.

The sprites used are nothing more than tiny stickmen, about a character square high. But they are in fact well animated. Bricks, blocks, ladders and bars are all as simple as the sprites. Even the colour scheme is plain, consisting of a mere four colours.

The 150 levels are stored in blocks of roughly 16 screens, and need to be loaded from side two of the tape (The main program is on side one and must be loaded first). This proves to be an annoying way of doing things, especially if you get to a high level, die and want to play again - you have to rewind the tape back to the beginning and are all as simple as the sprites. Even the colour scheme is plain, consisting of a mere four colours.

The 150 levels are stored in blocks of roughly 16 screens, and need to be loaded from side two of the tape (The main program is on side one and must be loaded first). This proves to be an annoying way of doing things, especially if you get to a high level, die and want to play again - you have to rewind the tape back to the beginning and reload the first levels.

Still, the game doesn't lose out because of these niggles - it's got playability, hookability and most of all, lastability.

Despite the below average graphics, sound and annoying level loading method, Lode Runner comes up with its head held high. An incredibly playable and addictive 150 screens of platform derivation, combined with a superb choice of options means you'll be playing for a long time to come. Despite the relatively few different elements on each screen, there's enormous variation between the different screens. Some are amazing, and amazingly difficult.

Not one of the most recent games but certainly one of the best. There are loads of screens, masses of action and lots of variation to keep you going. The slightly off-putting graphics turn out to allow you a relatively massive playing area with consequently more to do than usual. This will be a classic for a long time to come.

Fast arcade action that'll make the platform wallahs' eyes drop out. A massive 150 screens (More if you design them!) which will keep the midnight oil burning in many a dedicated arcade player's home. Graphically miniscule and aurally crude, the game's sheer addiction kept my eyes propped open until the owls went to bed.

Sound 34%
P. End of screen tune plus one or two effects.

Originality 38%
P. Strong Space Panic roots but you can design your own screens.

Hookability 89%
P. Extremely playable and addictive from the word go.

Lastability 94%
P. 150 screens plus an infinite number for you to create.

Value For Money 88%
P. Endless hours of designing and playing.

The game generator facility allows you to design and play your own screens of deviousness. You could shock your friends with your talent to design. The edit mode allows you to:

Graphically miniscule and aurally crude, the game's sheer addiction kept my eyes propped open until the owls went to bed.