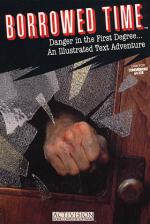 Oh boy, gedda a load of this one! Activision have followed up Mindshadow and the Tracer Sanction with a really excellent game featuring Sam Harlow, Private Detective. That's you, fellow wizards, and this is definitely a game to trade in a couple of bottles of Pipistrelle '79 for.

As the aforesaid Sam Harlow, you have to escape from the clutches of the New City criminals who are after your blood in a game that has so many excellent features that the While Wizard was at a loss as to what to tell you about first... Should it be the graphics? They're quick on the draw, beautifully drawn, and finely detailed. There are a number of objects in them not mentioned in the text but which are nevertheless important in the game, so the pictures aren't just there for decoration - you have to check each one out fairly carefully. They also boast some very nice animated sequences as well. Washing hung out to dry and blowing in the wind, people drinking in bars, hoodlums letting fly at you in a New City backstreet... There are many nice touches like these that really make the display come alive and help lay on the atmosphere as thick as wild honey. Yessir, this is definitely a game to lick the lips over... Not only are the graphics nicely drawn, but they're also nicely scaled. This isn't just Ol' Whitey playing at being a pretentious art critic - it's just that I'm really a bit tired of having huge pictures thrust down my throat. Mindshadow was a good example - very pretty pics but they dominated the display and left hardly any room for anything else. I like to have some pictures with my adventuring, but let's not have any arguments about what constitutes the real bones of an adventure - the location descriptions and messages, not the graphics. Graphics are great, but they shouldn't be allowed to take over, and in Borrowed Time they work just the way they should.

However, this program hasn't just got a pretty face, it's got brains too! The parser is excellent - not only does it understand sentences like 'Give the check to Hawkeye and then eat the hot dog', it also swallows 'it' when used to refer to a previously mentioned noun, lets you 'TAKE and DROP ALL', and will even allow you to TALK to other characters. And other characters there are in abundance. When you're not sipping scotch in the local bar and chatting to the barman, you're rescuing Mavis from one of the local baddies, or swapping lead visiting cards with the local heavies. Although none of these characters are truly interactive, the TALK to and SAY commands do at least give you the impression of carrying on a conversation, even if nobody actually says anything very much.

As if all that wasn't enough, there's even a very useful joystick option which allows you to enter a number of useful commands by moving an arrow about the screen and pointing at the relevant words, which are listed in panels on the right of the display. Using the joystick you can examine objects, move about, and even open windows and doors. Us Wizards, of course, use our wands to control the CPU directly, but for those of you with rather less charisma (and, more to the point, slower typing) the joystick option is a great boon. What I really liked about the joystick option on Borrowed Time was the way it supplemented, rather than limited, the game. Some 'joystick adventures' use the joystick for everything, with the result that 'everything' doesn't amount to very much. But here you can always enter more complex commands via the keyboard. And the responses are pretty hot too - trying to take an ashtray, for example, gets you the line 'The room would lose its ambience without the ashtray' and drinking Scotch in the bar elicits the immortal response 'The cheap hooch is a flaming river to your gut'!

There are numerous other points about this game that I could mention - the striking animated opening sequence, the very useful "quicksave" feature, the ingenious but totally logical puzzles, the occasional sound effects, and so on and so on. All I can say is that from the moment you start the game, and are flung headlong into a gun-battle with two of the local heavies, you're hooked. I remember when Mindshadow first came out, looking forward to further releases from Activision. This game fully justifies my flag-waving on their behalf. It's humorous, tricky, addictive and great fun. If you've got access to a drive, then beg, borrow, or buy this game.

From the moment you start the game, and are flung headlong into a gun-battle with two of the local heavies, you're hooked... It's humorous, tricky, addictive and great fun.