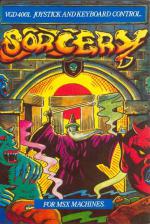 This is a conversion from the C64. It is an arcade adventure which wouldn't necessarily appeal to the true adventure fan but it certainly is an improvement on the arcade scene.

The star feature just has to be the graphics. The game boasts 50 different screens which are really sensational. You have scenes that show the various parts of the mansion in which a lot of the action takes place and much of the country around. Take a look at some of those on the cassette inlay. All drawn in such incredible detail that I spent a good hour just mindlessly wandering about admiring the view.

But there is more. The game itself places you in the role of a free sorcerer intent on rescuing other sorcerers imprisoned by the evil Necromancer. During your explorations you will come across various objects, some of which will be of use whilst others are a hindrance.

In each scene you will be pestered by annoying sprites - in both senses - which can be destroyed. However, they do have the effect of depleting your energy and so you race against time. In fact, there are ways of replenishing your lost energy but there is an overall time limit shown by a gradually diminishing spellbook.

Each screen is accompanied by a description of your location and a statement of what you are holding.

You will need to plan carefully and, I suspect, to map your journey if you wish to make serious progress.

There is so much to comment on this game that I am sure it will become a classic in its own right and produce lots of comment from both arcade and adventure fanatics. You must buy this one!

Other MSX Game Reviews By M.P.

There is so much to comment on this game that I am sure it will become a classic in its own right and produce lots of comment from both arcade and adventure fanatics.
Logout