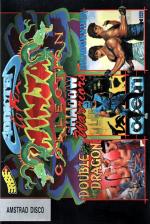 Another from the Ocean stable, the Ninja Collection doesn't set a place at its table for Mr Variety. All three of the featured games are reasonable but not brilliant beat-'em-ups.

Dragon Ninja has also enjoyed a large sortie into the budget charts recently (meaning that a lot of you have probably already got it). It's a pretty good game, with different platforms, passing traffic and stuff like that to liven it up.

Nice one Ocean - there's a really neat way to nark off people who are thinking of buying both packs...!

All three of the featured games are reasonable but not brilliant beat-'em-ups.
Logout