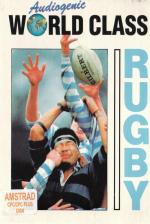 Rugby, believe it or not, is a game of skill. Hard to believe when you're watching thirty grown men with no teeth and far-too-tight head-bands mauling each other to death on a Saturday afternoon on a playing field in Wigan.

But it's true. Ever heard of a 'ruck'? What about 'grounding' and 'scissor moves'? All part of the weird and wonderful rugby terminology revealed as you read the instructions to World Class Rugby (after taking fifteen minutes to work out that two computer teams are playing).

Right, let's see now... you pick up the ball automatically when you run over it, use the joystick to control the direction to run in and... ooof! - some sixty-stone Aussie head-butts you in the solar plexus.

Right! How do you tackle? The player currently under your control is highlighted with an arrow. Run up to the offending Aussie, time it just right... and Fire! Gotcha! You bring the mad lump down... and about forty blokes jump on top of you in a 'ruck'.

So, whaddya do now? Waggle the stick, says the book. Yeah, you've got possession again! Run, run, run! You're past the 22-yard line! Run! The crowd are on their feet (Er, they're queuing to leave, actually - Adam) - quick, how do you score a try? (Fumble fumble.) Aha, press Fire and push in the direction of travel... and it's a try! The crowd goes wild! (Wild? It's furious.)

That's right, rugby is a game of skill, ahem. But World Class Rugby makes it all pretty painless. More than that, though, it actually makes it excellent fun!

Just like Anco's excellent Kick Off, World Class Rugby takes a potentially very complicated sport and turns it into a highly playable computer game. Sure, you can memorise all the different moves and controls, but the real fun is just piling in against either a friend or the computer, waggling like a madman and demonstrating all the forethought, finesse and judgment of a stampeding mammoth.

There are flaws, though. The graphics aren't going to win any prizes and the players don't react to the controls particularly quickly, but passing, locking and tackling are all pretty easy to suss out, and there's lots of scope for improving your game - including a variety of 'set moves' to master.

There are also a variety of opponents to tackle in World Class Rugby. You can elect to play either friendly matches or embark on a full World Cup competition. If you decide to go for the World Cup, you can set up the various competing countries as either human or computer players - the two-(human)-player mods is excellent fun.

World Class Rugby is the oval-balled equivalent of Kick Off. Its principal ingredient is sheer speed, playability and fun. But, unlike Kick Off, it's got a lot of depth too.

The graphics and general speed are all that let World Class Rugby down. Apart from that, it's great!

Rugby may be a game played by men with odd-shaped balls who hang around with sheep, but World Class Rugby is clean, civilised and a lot of fun. And no sheep.

Graphics 68%
Horrible colours (mind you, the pitch is green) and a bit slow.

Sonics 81%
The ref's whistle and the roar of the crowd - what more do you need?

Grab Factor 84%
Easy to pick up and instantly addictive.

Staying Power 90%
Lots of stuff to master, and there's the two-human option too.

Overall 87%
Nothing special to look at, but really playable and terrific fun.

Nothing special to look at, but really playable and terrific fun.