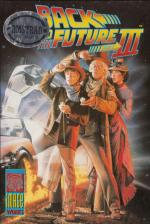 This is complicated. What's happened is this: intrepid temporal explorers Marty and Doc have successfully gone back to 1955 to stop the unscrupulous Biff from fiddling the future, but, on the way back, the magic DeLorean is hit by lightning. Marty gets stranded in 1955, the Doc disappears and then turns up in 1855 and becomes a blacksmith. So Marty goes back to rescue him and they both find he (Doc) has been killed, or will have been killed in a few days' time...actually, it helps if you've seen the film (if anything will help).

BTTF3 is split into four sections. In Level One, Clara the schoolteacher is on a runaway buckboard heading towards a precipice and you, playing the part of Doc, must charge after her on horseback. Catch up with her before she plunges to her doom, and everything's hunkydory. Fall off yer hoss, er, horse, too many times, though, and you won't make it and Clara's six feet under, har har.

Level One comes in four sections. First of all, you get a horizontally-scrolling seen-from-the-side section where Doc is galloping across the desert to save the softie schoolteacher. In his way, though, are large rocks and trunks that have fallen from the buckboard. You have to make Doc's horse jump just at the right moment if you're not to go sliding across the desert on your hooter. Other hazards include flying creatures, arrows and smaller rocks. You can shoot these if you're quick enough, or duck. Get through this first stage and you enter a viewed-from-above section where you race through a canyon dodging bullets and arrows as the cavalry and the injuns fight it out. Get through that and it's into another side-on gallop. The final section is viewed from above again. You're galloping through Hill Valley, just as the cavalry are taking on bad-guy Buford and his gang.

Level Two is very different. You're not saving schoolteachers any more, but shooting ducks and cardboard cutouts in a shooting gallery. You control Marty's trigger finger and a set of on-screen crosshairs, trying to blast everything in sight as soon as it appears.

Level Three has you pie-throwing instead of duck-shooting. Buford's gang pop their heads out of doorways and windows in the main street, and it's up to you to flatten them with well-lobbed pie-cases. Hit a baddie three times and he's down for good. Mind you, all the time you're trying to down those crusty baddies with the pies, they're shooting real bullets at you!

Get through the pie-throwing and you've made it to Level Four. Here you have to run along a steaming train, trying to pick up 'speed legs' left behind by the Doc. Each one increases the train's speed vital, because being pushed along right at the front is the trusty DeLorean, which you have to get up to 88mph so that you can make your escape...

The graphics are a world away from the ghastly mono Speccy ports of Back To The Future Part II, thank goodness. They're all done in mode 0, and they're a bit blocky, but there's plenty of colour and the horse on Level One, for example, is really well-drawn and animated. It's a pity, then, that the same horse seen from above in the other sections looks like a tap-dancing log, but there we are...

Sound is good too. There's not too much by way of in-game effects, but the tunes are really excellent.

BTTF3 is much, much better than its predecessor. The gameplay in each section is not exactly taxing, but the four levels go together to make a pleasing whole. It's tricky enough, too, to keep you going for quite a while... unless you're loading from tape, in which case, it'll drive you spare! Yup, the game's a multiload - tape users will end up tearing their hair out!

Most movie-goers reckoned the film Back To The Future II was a pile of old hoo-hah, while Part III was really good. The same applies to Mirrorsoft's licences. BTTF3 is no classic, but it's well put together, enjoyable and challenging.

Mirrorsoft has done a far better job with Back To The Future III than with the game's predecessor. Varied and tricky levels, decent graphics, and jolly good fun.

Sonics 88%
No prizes for in-game fx, but great tunes.

Staying Power 83%
A good solid licence that will keep you going - but not on tape!

Overall 78%
It's fun, varied and quite playable. No classic, but a nice little licence.

Fun, varied and quite playable... Well put together, enjoyable and challenging.