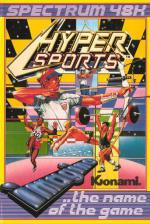 GET INTO training, sports fans, for a compilation of sporting simulations from Imagine '84.

Hypersports is licensed from the Japanese amusement arcade game of the same name, and should not be confused with Daley Thompson's Supertest, about to be released by sister company Ocean. On the other hand, it does the same sort of thing, and will test your biceps to the utmost as you pump the joystick in agony.

Swim two lengths of the pool, remembering to breathe. The graphics on this event are the poorest of the six.

There are three other swimmers, and the end of the pool moves towards the swimmers, rather than the swimmers moving at different speeds.

The game gets its feet on firmer ground with the clay pigeon shooting. The twin sights move up automatically, and you must time your shots to hit the clay pigeons, or skeets.

The vault has the athlete trying to somersault as far as he can from a gymnasium horse, and an archery contest involves shooting at a moving target, taking wind and elevation into account.

The triple jump will be familiar to Decathlon players as a more complex version of the long jump, but the real killer is the weightlifting. An hilariously musclebound, moustached klutz creaks and groans in his efforts to raise the dumb-bell, and you must choose the weight at which you want to compete. This is the event which really taxes your joystick wrist, and risks terminal damage to the keyboard.

The graphics are more varied and generally better than Daley Thompson's Decathlon, with much more humour. You play through the sequence until you fail to qualify three times, and each new round raises the qualifying level. There are tables for the three best results at each event, and the game certainly presents a challenging experience.

Hypersports is almost assured of success in the shops, but whether it is better than Daley Thompson's Decathlon is another matter. The programming is certainly of similar excellence, except for the swimming event, but the sports themselves do not form a coherent sequence, in the way that the 10 decathlon sports do.

It is certainly superior to the current crop of sports simulations, and it will be interesting to sec how it stacks up against Daley Thompson's Supertest, shortly to come.

Certainly superior to the current crop of sports simulations.