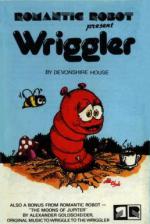 Crawling out from the dunghill of worthy utilities comes the Romantic Robot maggot. Romantic Robot has hitherto confined its activities to producing utilities and music programs, but its first arcade game demonstrates an appreciation of entertainment as well as a sound knowledge of byte lore.

Wriggler casts you as a maggot, big and white and squiggly, taking part in the four stage maggot marathon. First you must find your way out of the garden, then negotiate the scrubland, only to crawl underground into the tortuous labyrinth. Thence to the mansion itself and the final exit.

The game is essentially an extended maze, with plenty of confusing exits and entrances which defy the laws of normal map-making. On the way you must avoid or destroy the marauding denizens of the lawn. Particularly revolting are the giant deathshead spiders whose spindly legs inch along the corridors and paths with deliberate menace. Some of those monsters are relatively harmless in that they stick to known routes. Others such as the wasps and termites, zero in on you and soon digest your weak, white pulsating body.

Graphics are large - two or three character squares at minimum - and although the movement is slow, maggots do not exactly shift like the clappers themselves.

A piece of electronic muzak titled Moons of Jupiter is thrown in on the B-side of the cassette - definitely music to squirm to. Wriggler represents a good few hours of fun. It contains plenty of humour and challenge in a rather different setting to the normal hi-tech or low-fantasy scenarios we have come to expect of arcade-adventure generally.

Contains plenty of humour and challenge in a rather different setting to the normal hi-tech or low-fantasy scenarios we have come to expect of arcade-adventure generally.