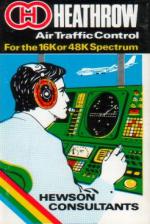 Probably the most disturbing simulation ever written has been re-released in a new improved form by Hewson Consultants. Heathrow International Air Traffic Control is guaranteed to dispel any idea you might have had that airports are safe places to be in.

The original program was a classic of simulation, and with the addition of Concorde flights, and a completely different version for Schiphol airport in Holland thrown in on the B side of the cassette, the new product is even more impressive.

The screen displays a radar map of the area around the airport. Aeroplanes enter the screen at any one of four stacks, points where pilots are instructed to circle until the controller brings them in to land.

It sounds easy, but it is not. The idea is to get everything moving in an orderly flow, but you only have to make one mistake to start a chain reaction leaving bits of broken aircraft strewn all over West London or the Zuider Zee. Although the program is slow, being conducted in real time, and tests you over half an hour of activity, once something starts to happen you will find it very difficult to work out the instructions for each individual aircraft quickly enough.

Although it is not the sort of thing to drive everybody wild with excitement, for those who like beating their brains into a pulp on wet weekends watching Concorde carving up the rear end of a DC10, Heathrow ATC is what they have been looking for.

For those who like beating their brains into a pulp on wet weekends watching Concorde carving up the rear end of a DC10, Heathrow ATC is what they have been looking for.