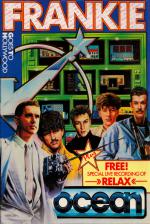 Who can take you to the Pleasure Dome? Frankie can. Move your shadow through the screens of kitchens, lounges, dereliction and prissy suburban streets, collecting what may help. Floppy disks open worlds of arcade fantasy where aircraft bomb Liverpool, where only you can save the lives of your friends. There's a murder to be solved; eight suspects - where's the clue? In a revolting pair of socks perhaps, but there are many entrances to the Pleasure Dome.

Screens explode with colour as windows open out onto new scenes - walk the shadow from behind and step into the frame, step into pleasure. Shoot Thatcher, watch Reagan and Gorbachev spit at each other. Once in the Dome you're no longer a shadow, but there's a dozen or more scenarios within the game, and four symbols to collect before you reach the centre.

Text intrudes slightly in the form of clues - 'the sea of holes is a sea of rooms' - triggered by the successful completion of problems. You must recognise the alternative possibilities of ordinary objects - light switches, telephones, televisions - and experiment.

Faithful to the spirit of the band, if necessarily less outrageous, Frankie is a beautiful program, an adventure of great imagination, with some superb programming techniques in the use of expanding windows and icon-like objects to pick up and use. The screen shots shown here are from a pre-release version, but they give some indication of the quality.

The game comes with a 15 minute live version of Relax supplied on a separate cassette, recorded in the States and previously unreleased. The reverse side of this tape features playing tips for the game, narrated by Patrick Allen.