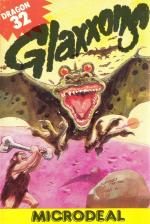 An arcade game that duplicates the original (note similarity of name) to as high standard as the Dragon is capable which, in my opinion, is about 75%. It's very much a space-zap game, allowing you to kill off aliens as they swarm to attack your position.

Many recent games from Microdeal now offer three options on colour of background. However, once you have chosen you cannot change your mind without reloading. Green was best here. It gave a colourful and varied game.

Choice of colours apart though, there wasn't much variety in the game to make it addictive. Speed and manoeuvrability were required to dodge the descending hail of laser missiles and the aliens themselves which peeled off from the main formation. The speed of interaction was true to the arcade game and the joystick quite responsive. One problem you have is the limitation on your firepower - only one missile at a time. Pressing the fire button gives you a fresh missile but wipes the first one out. There are tactical advantages to this.

Quite difficult to play as it's fast-moving.

Quite difficult to play... Fast-moving... Pressing the fire button gives you a fresh missile but wipes the first one out.