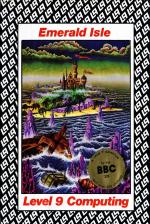 All at sea in the canoe

Okay, I'll admit it up front. I'm not half as smart as Alice, but I reckon I'm a damned sight better looking.

Emerald Isle is a new offering from Level 9, the Torquemadas of the adventure trade. It has over 200 'rooms', each one with its own picture - that's right, picture. An adventure with graphics. Mind you, they're very reminiscent of the holiday snaps taken by my wife. You're left wondering quite what they're supposed to be pictures of. I haven't found any with people in them yet (at least my wife gets the odd ear or foot in hers!) and I forgot all about them after a while and stayed with the text.

You start the game parachuting into the Emerald Isle and danging from a tree as vulture bait. The object is to gather all the treasure together and present it in the appropriate place in the appropriate manner. I can't be more specific than that because it would spoil the game, and in any case, I don't know any more - I haven't finished yet. Oh all right, I've hardly started. I've got the canoe but I can't get the flaming thing into the sea. I've tried everything, including "ATTACK CANOE". I've humped it all the way from the beach to the river (I'm not daft, rivers come out in the sea), but I couldn't put it in the river either.

At that point I was overcome by a great melancholy and threw myself in the water. And another thing, how do I get the lousy hammer? If I ever get it and meet the beggar, he'd better watch out as I'm in no mood to take a caring attitude to the disadvantaged. I'll just say "It's not your lucky day, is it, pal?" and POW! I've already attacked the seamstress, but that wasn't as much fun as I thought it was going to be.

All you lot out there with twisted minds and plenty of time on your hands are going to love this. No doubt several thousand clever-dicks will be writing in saying how easy it is to get the crummy canoe launched, and expressing surprise that I found it the least bit difficult. Well, it's not my fault that I'm of sound mind - or at least I was before this came through the letter-box.

Level 9 provide a clue sheet which is almost as complicated as the game. It works on the linked list principle, with each entry pointing to another two. About halfway through you realise that you've forgotten what you were looking for in the first place.

I've tried all the usual naughty stuff like looking through the program for the keyword table, but that didn't tell me anything I didn't already know. I wish Level 9 would provide reviewers with the solution, so that we could be all superior and snooty about their feeble attempts to bamboozle us. As it is, I'm getting some pretty funny looks on the bus with my sad little cries of "To get the plank you need the hammer. To get the hammer you need the plank. Argh! KILL KING. Oh I hope I grow up to be like Alice."

Other BBC Model B Game Reviews By Harry Sinclair

Although this is an adventure with graphics, I forgot all about them after a while and stayed with the text.