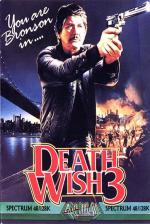 Charles Bronson - moustachioed man, advanced tactical street-cleaner, and man with the largest bazooka in the Western hemisphere - has finally been given his very own game.

Death Wish III, based on the film (or excused on the basis that there is a film called Death Wish III and why not make a game out of it), it involves the man, the bazooka and five down-town riots to be quelled.

And the way to quell those riots is to get in there and pulp those bad guys. Because Death Wish III is, well, it's rather violent really.

What we have here, essentially, is a left-right horizontal flip-screen affair. We begin with Charlie, the moustache, and a bullet proof vest, armed to the teeth - with a pump-action shotgun, or some other such frippery - surrounded by villains of a very ugly nature. And all Charlie has to do is take out the villains.

To do this, Charlie has a choice of four weapons, each with varied strengths of ammunition, but all with the capability of reducing your average punk, passerby or pedestrian to dead meat. All weapons have limited ammunition, so it's handy indeed that there are the odd rifle, bazooka and shot-gun lying around the deserted buildings for Charlie to go and pick up.

First of all though, he has to locate that weapon. Thankfully, that's not too hard a task, since the bottom half of the screen is taken up with a compass, a map, and a panel indicating the type of weapon you are currently holding and how many shots you have left. The compass shows the four cardinal points - North, South, East and West - and the appropriate point will flash according to which way you are facing. The map shows your position in the area in general by a small floating blob and extra weapons are indicated by pulling back, or pushing up the joystick to change his direction, and carrying on around the block (as our American cousins would no doubt put it).

Eventually you'll find a door to the building you're passing. Enter it by pressing Return. Once inside you can search around until you reach your new gun and then carry on with the important business of knocking off the thugs.

Incidentally for extra points thugs can be knocked off from inside the buildings by firing through the windows. Also to be knocked off, or just blown up, are tables, chairs and the odd TV set. none of which give you any sort of points score whatsoever, but provide a few seconds of light entertainment.

Not that Death Wish III needs moments of light entertainment. It has plenty of excitement in its own right. The baddies come along thick and fast, and the multiple weapons each produce differing effects. An ordinary pistol just knocks the guys over and leaves them in a heap on the floor. Your actual bazooka reduces them to something unrecognisable. Very gratifying.

There are also diversions: hookers, who try to tempt Charlie into things Jeffrey Archer never did, old grannies who get mugged and then fight back viciously using handbags and feet in a shocking display of violence against the younger members of the community Medics run across the screen, defying bullets to drag the wounded off to recover in hospital.

Then there are policemen. The cops are there to help, but the odd one tends to get into the line of fire, and when such a thing happens, and a cop gets wasted, then you're in trouble. Police being the vengeful creatures that they are, you may well find that there's an extra gang chasing you, and this time, they're in uniform.

There's no denying that Death Wish III is a nicely put together game, it looks good, and the 128 version features some really Death Wish music (courtesy of Ben Dalglish) but the gameplay is actually rather standard stuff.

And it is mind-boggiingly violent - and you maybe think that's a problem. Or not. Whilst reducing people to lumps of meat seems great fun to begin with but after a while, it's just more of the same. Which psychologists will no doubt reckon is a bad thing.

Whilst the map was an impressive idea, I found it hard to work out which way to turn, and lingering over a decision of that kind tended to leave me badly battered, since the thugs don't wait for you to move before they get in there and kick the hell out of you. It's also difficult at times to tell your character from the mob that surrounds you, so escape is quite difficult.

I've no doubts that Death Wish III will sell like the proverbial hot cakes because it promises lots of violence, but I'm not sure that that is going to prove as absorbing as Gremlin seem to think. And the game, ultimately, is neither state-of- the-art nor hugely original

Outrageously violent with occasional touches of humour. Not enough gameplay to hold interest, though.

Outrageously violent with occasional touches of humour. Not enough gameplay to hold interest, though.