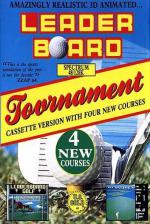 Perhaps one of the most successful and highly revered golf simulation games of the last few years was US Gold's Leaderboard. And when you're on to a good thing, you might as well milk it for all it's worth. Working on such a principle, the boys at US Gold have decided to produce a new Leaderboard. Thus we now have Leaderboard Tournament, remarkably similar to Leaderboard, only with different shaped holes and a lot more water.

The aim of the game is as before. Well, there's not a lot else you can do with golf is there? Get round the course in as few hits as possible, and don't fall in the water because it makes you look silly. For those who were fans of the original Leaderboard and have gone into a decline having completed all the holes on the original, Leaderboard Tournament should be welcomed as a source of great delight. To those who missed out on Leaderboard, salvation is at hand. (And there's the promise of a third in the series in the near future too) Nice one.

Follow-up to the classic Leaderboard. More of the same with lots and lots of different holes to play.

Follow-up to the classic Leaderboard. More of the same with lots and lots of different holes to play.