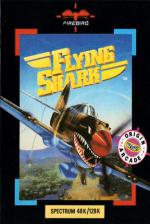 I approached Flying Shark with a certain amount of trepidation. It's been a long time coming and it suffered a change of programmer halfway through. Usually things don't look hopeful in this situation.

Except that in this case the replacement programmers just happen to be two of the best programmers currently working on the Spectrum: Dominic Robinson (Uridium and Zynaps) and Steve Turner (Quazatron and Ranarama).

No surprise than that Flying Shark is a truly wonderful conversion.

Those who have played the coin-op will doubtless be muttering in the corner, protesting that it's too hard a game, things move around far too quickly and how on earth could anyone do anything like that on the Spectrum. How indeed? Well, Firebird has managed it!

For those of you who don't know, Flying Shark is a sophisticated top-to-bottom scrolling shoot-'em-up a la Lightforce, involving a little biplane and the most incredible amount of enemy fighters, tanks and ships.

You just keep going and shooting, picking up bonuses and improving your fire-power, all the better to shoot more things. So what makes it so special?

It's brilliantly done, that's what.

The coin-op is fast and furious action all the way. Things just keep hurtling themselves towards you, and it's a case of constant pressure on the Fire button. The Spectrum conversion is extraordinarily accurate and keeps up the same pressure, with the waves coming at you in the same patterns, and bonuses appearing in the same places. The quality of scrolling - in particular - is very fine.

To collect a bonus you first have to shoot out the planes in a special wave. In the original, these were always red, but in the conversion they're yellow - hardly a serious detraction from the original. Your bonus, and extra weapon, new smart bomb, extra thousand points must them be picked up. Extra weapons are tricky things. They jig about the screen, flying off the edge and re-emerging, and it's perfectly possible to miss them altogether. Everything else, thankfully, stays still.

Off-screen movement is an interesting extra. The coin-op sort of scrolled horizontally a bit too, as well as the serious vertical scrolling bits. So you get an extra playing area to each side as well. Although you can't actually see what's going on at the sides, it is possible to move right off the screen, and then reappear in glowing triumph, having just mangled a coupla tanks.

Tanks? Yup, tanks. As well as the planes, there are tanks and ships to contend with too.

Which brings us on (rather neatly I thought) to the question of space. Obviously, you're up in the air, and the tanks are down on the ground. And the feeling of the space between the two is brilliantly done. Subtle shadows beneath the treetops give an impression of depth, and the way things move underneath each other creates a real feeling of height.

Only one gripe. Everything is monochrome - that's perfectly understandable. But does it have to be yellow? It does pall after a while. Couldn't we have had the levels in different colours? But I liked the red flashing screen as the smart bombs exploded and I'm also a fan of the Steve Turner music which sounds like an old New Order track!

I can't tell you how much I love Flying Shark. Well I'm doing it now, but it's just great. It'll keep you hanging on the edge of your seat.

If you're looking for originality, it's not going to do a lot for you. But if you want a fast, difficult faithful conversion, go for it.

Marvellous conversion that loses none of the speed, difficulty or excitement of the original. An absolute Classic treat.

Marvellous conversion that loses none of the speed, difficulty or excitement of the original. An absolute treat