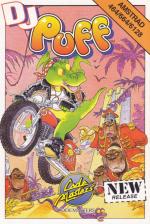 DJ Puff's Volcanic Eruption? What sort of title is that? It sounds like someone suffering from a gastric complaint!

Hoever, the hero of our tale, Puff, is above such vulgarity. This little dragon bloke is so cute he will make you sick. Puff (who is now a DJ) has to recover his record collection from the evil Captain Krip (who's nicked it).

To do this, you have to wipe out all Krip's nasty henchmen (and hench/whelks and hench-blobs) by firing twirly things at them, lobbing bombs or breathing fire (depending on which bonus you've picked up).

The idea is to collect a whole load of records scattered around a platform maze. But between you and these rings is a whole range of nasty surprises. Some of these are in the form of blobby creatures that smile engagingly whilst trying to do you in. Some are giant whelks that occasionally throw out a mine. Others are scowling flat-tops who fire arrows. There's more, but that's enough to be getting on with...

...Especially since there are nasty things you mustn't land on (upward-pointing arrows in the ground and conveyor belts that try to take you where you really don't want to go). Oh, and don't fall in the water.

DJ Puff is nice and colourful, but it doesn't exactly move at the speed of light. The little fella himself can go left and right, jump in theair and launch any special weapons.

You don't get any sound effects during the game. Instead, you get a really rather sweet soundtrack which plays continuously (until you bury that hatchet into the keyboard).

OK, that's enough nastiness at the expense of poor little Puff. It's yet another platform arcade game, but it's a pretty good one.

Sonics 63%
No sound effects, but the sort of tune that finally leaves you chewing the curtains.

Grab Factor 74%
Attractive and easy to get into, but you see straight away it's going to be a bit of a plod.

Staying Power 80%
It's addictive enough to keep you coming back to it until you finish the thing. Which will take a while.