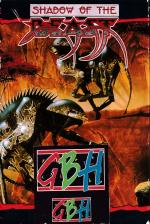 You've got a face like a rattlesnake, a skull like the back of a Ford Anglia and a wardrobe consisting of two hankies and some string. Your skin's got a pallour only marginally healthier than month-old tripe and you can't even walk and punch things at the same time.

Not nice, eh? Mind you, you're a darned sight nicer than the other guy. He is the Beast, and responsible for the murder of your own father and countless other innocent humans. Yes, you were human too, once, and it was the Beast who turned you into this horribly, ghastly, snake-headed horror. Which is why the Beast must pay.

Shadow Of The Beast is a scrolling kick-'em-up with lots of exploring and timing puzzles to keep you busy as you search out the Beast, belting its minions into oblivion as you go. And you're pretty good at belting things, because although you'd get a few funny looks on the bus, you're tough as nails, with a Schwarzenegger physique and fists like concrete.

Your fighting moves are limited - which makes learning them easy - yet highly effective. Hit the Fire button while you're walking and you stop briefly to bash whatever is in your path. Press Fire while you're jumping and you deliver a devastating kick. Push down on the 'stick and fire, and you punch the lights out of any ground-hugging creepy-crawlies that come your way.

The key to success is timing your moves. None of your assailants are that tough, but they do have a habit of creeping up on you unawares. And there are some baddies, like bouncing eyeballs (yuk!) and dangling spiders as big as your average family car, that you just have to work around - you can't destroy them.

Take a hit from one of these - or from any other creature - and you lose one of your twelve energy points. When all twelve have gone - well, it's back to the start, I'm afraid.

Let's start at the beginning, though. First of all, you've got to explore your surroundings - watch out for nasty bats, circular sun-god-type nasties and man-traps on the ground. Head right and you'll come to a well. You can actually get into this well and climb down it... but don't bother. When you get to the bottom, it'll tell you you need a key. Great. What you really should have done was head left...

This time you'll come to what looks like a treehouse. Go inside, and you're into Level Two, an underground maze of tunnels and ladders. Watch out for giant ants, club-wielding ogres, fireballs, huge dragons' heads that stick out of the floor and ceiling without warning, and - thank goodness! - potions to restore your vitality.

To get out of this level you need firstly to learn your way around and secondly find some way of wiping out the grisly end-of-level guardian. The answer is a creature which squats at the end of a corridor on the other side of the complex. It sits there, gobbing balls of fire at you periodically and lobbing a sphere up and down. You need to choose your moment, duck in there and hit the sphere before dodging back out of the way. Hit it enough times and it disappears. You now have a weapon to tackle the guardian with...

...And lo and behold, you emerge up through the well! The next section is above ground again, but much tougher than your first tentative little forays. You tread warily for what seems like hours but can only be a few minutes across this insect, bat- and eyeball-infested territory, finally arriving at a castle with a doorway.

Level Four is slightly smaller than Level Two, and only marginally tougher. There are a whole new range of hazards to contend with, though. Many of the ceilings drip poison, strange (and indestructible) hopping creatures first seen above-ground must be jumped over, and at one point giant spiders hang from the ceiling, gently moving up and down. You can't kill them - so can you dodge past them?

As with the second level, there are power-ups for your vitality and objects to collect. One of these is a spanner you'll need later; the other is a gun. You'll need the gun for the end-of-level guardian, which will require some pretty fancy jumping and shooting to defeat.

The next level is really quite different. Your warrior is no longer running, but zooming along in underwater gear (or is it a spacesuit?). Suddenly Shadow Of The Beast shifts tempo into a horizontally-scrolling shoot-'em-up where you face more bat-like beasties but also lasers and missiles.

And this, dear friends, is as far as we are taking you. From here on in, you're on your own as you search out the Beast...

Graphically, the game is unusual in using the Amstrad's four-colour mode. This leaves the screens looking often dingy and empty, but pays off handsomely in terms of detail and animation. The above-ground sequences suffer from the attempt to shade the sky and foreground, but the rest look really excellent. A bold, but very wise, move by Gremlin.

Scrolling is a bit iffy here and there, but set against the general standard of the graphics, that's a small point. Collision detection is excellent, and you can judge positioning almost to the pixel - essential with some of the timing puzzles. Use a fairly heavy joystick, though, because the wrong move in the wrong place is frequently catastrophic.

The soundtrack is quite listenable and atmospheric. You can actually play the game for hours without feeling the usual compulsion to turn the sound off! The effects are clear and effective - the 'thwacks' you get when you hit something help you time those fighting moves to perfection.

All this wouldn't help much if the game itself wasn't up to it. Fortunately, it is. Shadow Of The Beast on the 16-bits was a graphical tour de force, but the gameplay was tough, shallow and incredibly frustrating. Well the good news is that the Amstrad version, thanks to Gremlin, has retained all of the virtues and none of the vices of the original. The graphics and soundtrack are great, but the game is much easier and much more playable. The whole package has been very well judged indeed.

There are really only two gripes. The first is fairly minor - the are several long stretches where either nothing much happens or you get a whole barrage of enemies which can all be eliminated easily with the same series of moves. You can't really relax, but there's no challenge either. The second gripe is a biggie. Once you lose all your vitality you're sent right back to the start. It doesn't matter how far you've got into the game, there's only one restart point. Ouch! That means that even if you can do the first few levels with your eyes shut, you've still got to plod through them every time you want to take another shot at finishing the game. OK, so it makes the game last longer, and gives it an epic feel as you have to complete your adventure in one sitting - but that's nothing compared to the frustration and tedium of having to start from scratch every single time you want to play the game.

Shadow Of The Beast is a game we thought we'd never see on the Amstrad. A game with a reputation of being all graphics and no gameplay. Well Gremlin has retained its excellent graphics, by Amstrad standards, and tweaked the gameplay to the point where it really is a very good game in its own right.

However, it does herald a less welcome trend. £12.99 on tape, £15.99 on disk? This might be just because it's such a big game (it takes up both sides of a 3-inch disk). Alternatively, it might be the shape (or price) of things to come. We shall have to wait and see.

Graphically, one of the most innovative games to appear on the Amstrad for some time. A bit long-winded at times but if you've got the patience it's an enjoyable and playable arcade romp.

Grab Factor 83%
P. Playable right from the start
N. Doesn't look its best until you get into it

Overall 84%
Just a tad too patchy to be a Mastergame

Psygnosis was the original publisher of Shadow Of The Beast, a game which left punters gob-smacked with its sheer graphical excellence. That game alone, with its multi-level parallax scrolling, fantastic back-grounds, animation and sprites, must have sold more than a few Amigas and, arguably, set new standards for 16-bit graphics overnight.

Even the artwork was spectacular, commissioned - as with all Psygnosis stuff - from Roger Dean, famous sci-fi artist of the '70s and the man behind many a Yes album cover.

However, hype-hardened reviewers pointed to the fact that the gameplay really was rather tough, unoriginal and frustrating, and that a price of £35, even with 'free' T-shirt, was squeezing the last drop of loot out of Amiga owners stunned by the graphics. Nevertheless, Shadow's reputation as a milestone in gaming lives on - as does that instantly-recognisable lizard-headed warrior - thanks to Gremlin.

One of the most innovative games to appear on the Amstrad for some time... An enjoyable and playable arcade romp.