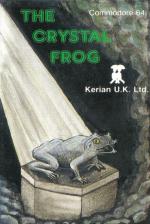 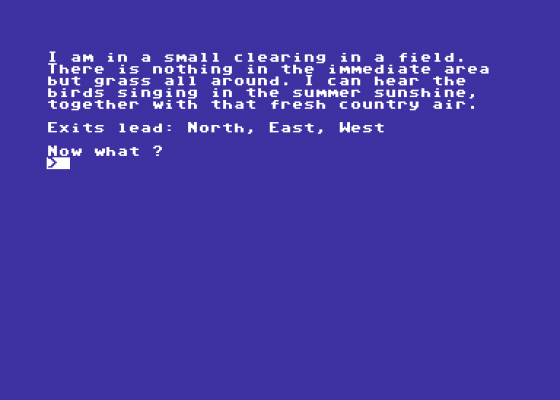 This cheap cassette adventure is of the classic type, the idea being to find the Crystal Frog and return with it intact.

The adventure is "Quilled" - this utility has had an impact on adventure almost as big as Dungeons and Dragons did. As you may expect, Crystal Frog has fast response times, a fair number of locations, a reasonable vocabulary and verb/noun type input.

From the first, each location is well described with nice attention to detail, so you are told how the sun is shining, what the trees look like and so on. I always think that descriptions play one of the most important roles in an adventure, and these conjure up quite vivid images of the lands through which you are travelling. 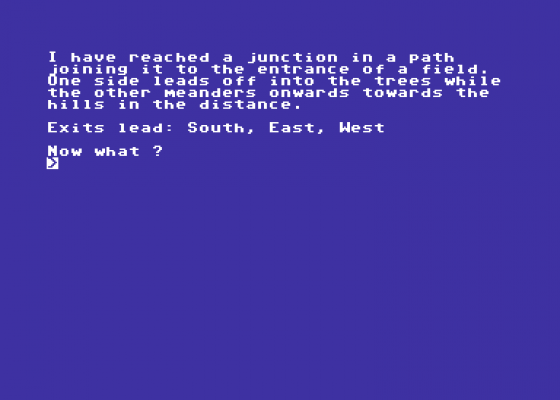 Upon my travels I soon discovered some quite unusual objects, a gas mask, for example, and a spade (what is that for, one wonders). I also stumbled upon a rather odd scarecrow, very lifelike with spindly arms and legs. It was here too that the adventure dropped some points in my book. Firstly I tried EXAMining it and was promptly told that I couldn't. Why not? The scarecrow was the most interesting object that I'd come across and I was determined to learn more about it. I tried going towards it using all the available directions, SEARching it, and just about everything my experience had to offer, but to no avail. The scarecrow stood happily unexamined and I stomped off to the next location rather annoyed. This is a common weakness of Quilled adventures (and not only Quilled ones either), that they fail to offer a comprehensive EXAMINE facility. It can be done with The Quill, although it isn't instantly obvious, as I recollect from my cautious dabblings - and one "Quilled" adventure from about this time last year, the Spectrum Tower of Despair by Games Workshop, had an extremely powerful EXAMINE. To be fair, you can examine objects in Crystal Frog, and that underlines another point about the examine facility; once an explorer starts to do it, he wants to keep on and gets frustrated when something that may merely be adding to the general atmosphere, like the scarecrow perhaps, cannot be looked at in more detail. But I digress ...

Soon I found a cave and promptly entered, and from the description found it to be comfortable, dry with a nice leaf bed - a veritable home from home! Also present was a fur coat that I greedily took simply by GETting - doing so was a slight mistake, I should have EXAMined it first, for it in fact turned out to be a big bear that promptly attacked me. The rest I'll leave to your imagination, but it wasn't very nice. There are quite a few of these unexpected hazards throughout the adventure and I found myself with a head split in two on more than one occasion!

The game is an enjoyable one, although the vocabulary, reasonable in itself, is rather limited in the respect that you can't do much outside the set game. There are not a lot of objects, but enough to get you puzzling over their function, and some very nice touches, like the apple - I won't tell you what it does, but it comes as a pleasant surprise.

Overall this is quite a good little game, and one which is well worth its very low price.

Quite a good little game... Some very nice touches like the apple - I won't tell you what it does, but it comes as a pleasant surprise. 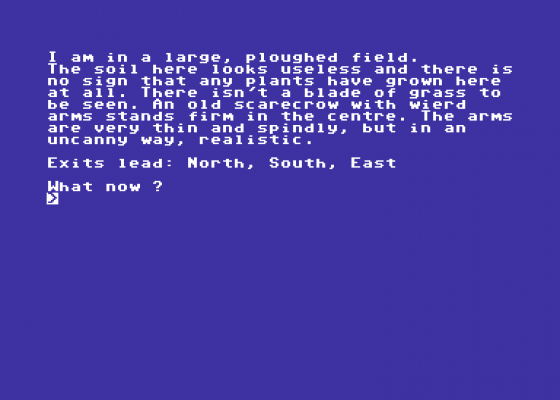 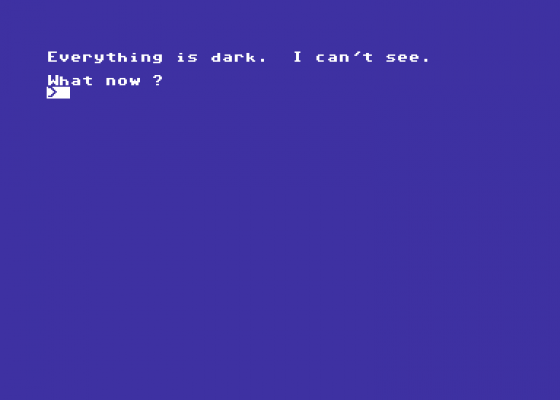