﻿ The Hitchhiker's Guide To The Universe (Infocom) Review | Zzap - Everygamegoing 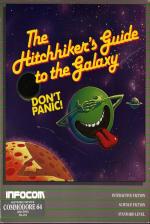 Hitchhiker's Guide To The Galaxy

Next a look at this month's disk-based adventures. I feel I can begin by saying that there's now absolutely no excuse not to buy a disk drive, other than complete, abject poverty.

Let me explain. I have just spent the last seven days in the very back of my cave, isolated from the rest of the world, doing nothing other than to play the latest release from the wonder programmers at Infocom, Hitch Hiker's Guide To The Galaxy. My verdict? Absolutely *wizard*!

I feel I have no choice but to tell you about it at length, even though it is vastly expensive and not yet widely available in these isles. My hope is that someone will soon rectify this situation.

Like the other Infocom games, Hitch Hiker's has no graphics. Yet it must rate as perhaps the most witty and ingenious adventure ever. For a start, it includes one of the largest vocabularies yet seen by me. Indeed, its handling of words is so convincing you often feel you are engaged in genuine conversation with it. The most improbable entries you can come up with are often greeted with appropriate and sometimes hilarious responses. Type 'Kiss Ford' and it responds 'This is family entertainment, not a video nasty.' Type a command after you've died and it responds 'You keep out of this, you're dead.'

The descriptions of the locations and of events which take place are also brilliantly witty and perfectly capture the feel of the book on which the game is based.

Another great feature is the Hitch Hiker's Guide itself, which once found can be used to obtain useful or at least humourous information on almost any of the large number of objects and characters mentioned in the game. Even on the rare occasions when it has nothing to offer, it comes up with a suitable response such as 'That section of data was destroyed during an office party last night.'

As is the case with all Infocom adventures, the packaging of Hitch Hiker's is absolutely superb. Included in its price, amongst other things, are peril-sensitive sunglasses and pocket fluff(!).

I did not look too becoming in the peril-sensitive sunglasses, which are supposed to protect your eyes from any sort of horror by turning completely opaque at the first sign of danger . . . not the sort of thing a keen and fearless adventurer like me should wear. Mind you, throughout the game you could well do with a pair of these zany specs.

You start the adventure playing the role of Arthur Dent who wakes up on the worst day of his life with a tremendous hangover, a condition the White Wizard is not unfamiliar with after a heavy night on the Pipistrelle '56.

An aspirin and a few more moments of exploration later and you discover that you are in the same situation as in the start of the Douglas Adams book - a bulldozer is about to knock down your house, and, more importantly, a fleet of Vogon ships are about to destroy the earth to clear the way for an interplanetary highway.

Early problems include how to avoid being killed by a flying brick as your home is crashed, and how to escape earth's destruction with your friend Ford Prefect. A basic knowledge of the book is helpful at this stage, but before long the adventure takes some highly original turns and offers a series of difficult and brilliantly conceived puzzles.

One of the best involves trying to secure a Babel fish from a dispenser in the hold of one of the Vogon craft. You won't believe the deviousness of it. I don't believe the deviousness of it. Later still, by discovering and activating an improbability drive, you even find yourself taking the roles of other characters in the game in completely different time periods, and encountering such beings as the Bugblatter beast of Traal, which is so stupid it thinks that if you can't see it, it can't see you.

Needless to say, the number of locations is vast, and the game also features a useful scoring system which often gives clues as to whether you've made a giant step forward or a massive blunder.

With this game's humour, size, and attention to detail, it can only be said that it is destined to become one of the all-time classics. All I wish is that someone would get a move-on and start importing it pronto, preferably at a slightly lower price!

Hitchhiker's Guide To The Galaxy

With this game's humour, size, and attention to detail, it can only be said that it is destined to become one of the all-time classics.